The elf that stands before you radiates an intense light. His aura flows around him, swirling in time with the pulsing energies of Magic itself. His eyes are grave, and they look deeply into your heart and soul, judge and jury all in one, staggering in their weight. He bears a tome under one arm, ancient and full of secrets known only to the Magi. Upon its surface, runes and sigla appear, shift and move, in a pattern easily recognized as matching His heartbeat. It is said that the core of magic is the innermost depths of the soul - gazing into His eyes once more, it seems clearly a truth He has embraced. 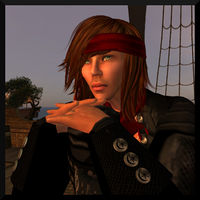 (Written for entry in to the Chosen of Fate in 2003. Does not include history after that point.)

In the year 2569, on Zoardryn the 15th in the month of Apathy at precisely noon, in the great woods surrounding Loth Llorien, born into the realm was one of the most unique people in history. His name? Isolas Starleaf. Older brother to Kylanae Starleaf, Isolas and his brother spent much of their childhood in the tree-city, especially the guild of mages and wizards. The elven wizards were kind to the children, and would often practice their new illusions on the children, much to their delight. When they reached the appropriate age, the two brothers joined the mages' guild themselves, and chose to serve Lord Myronides, God of the Elves. There they learned the spells they had always enjoyed watching as a child. But, that was not enough for the boys. they took on the ranger class, and even later, that of the thieves. Life was good, and Isolas met a young beautiful elf named Rosalind. But as life went on, Kylanae was forced to return to their family homestead to tend to family matters. After that, life became overwhelming for Rosalind, and she ended her life. Isolas felt alone, but had many friends: most notably Natilena, Rone, Silonch, DarkClaw, Marisa, and Lord Tokugawa (I'm undoubtedly leaving out many - *profuse apologies!!*) Then, when he felt nothing could get worse, it did.

Lord Myronides announced that he was leaving the realm, no longer interested in living amongst people he did not know. The week that followed came and went slowly, and alas, he retired. Isolas was crushed. The atmosphere of Tel'Quessir could not be recreated. In an attempt to work off his anger and disappointment, he tried to adventure a bit. Well, he died a few times in the process, simply lowering his morale to unbelievable lows. Then, a glimmer of hope: a friend he had recently made in late night conversations, Wylin the Dwarf. Wylin confided that he would be seeking immortality to attempt to revive the dying community of Goods. On top of being good, Isolas knew Wylin was a fun soul. Isolas vowed he would worship Wylin when he reached an appropriate level. It was then Isolas was referred by many, including close friends Schwartz, Oook, and DarkClaw to the Chosen of Fate. He explored their vast sanctuary and fell in love with the people and atmosphere, but also understood that his promise to Lord Wylin would eventually lead them to parting paths.

Ambassador: 08/23/2005
Entry: Isolas sails into port on his rapidly-sinking boat.. er, ship. He steps onto solid ground just in time.
Exit: Isolas sails into the distance on a ship that looks oddly familiar... HEY! He just stole your ship!

Demigod: 2006
Entry: Isolas emerges from the shadows.
Exit: Isolas vanishes into the shadows.

March 10, 2005: A ship wrecks near the Longship cove, and Isolas and the band of pirate miscreants under his command are rumored to have been behind it's destruction.
June 13, 2005: Isolas celebrates his 1400 year birthday.

August 19, 2005: Isolas is reformed from Cordir's following as he is granted the Immortal position of Ambassador.

September 11, 2005: Isolas becomes Attendant to Cordir. While this is a violation of mud tradition, based on the pantheon at the time, Tynian allows it.

October 10, 2005: 10/10/05 - Isolas is promoted to Demigod! He starts the Lawful Neutral following of the Fellowship of the Magi, and Drakar is his first follower. His initial finfo reads, "The Fellowship of the Magi are a group dedicated to Magic in all its forms: Whether the raw, natural forces of the earth itself, wielded by shamen, the deific energy channelled by the clergy, or the fiery core of creation itself, the Wyld Magics, all are equally embraced. All members of the Magi are required to have a spellcasting class upon presenting themselves for entry into the Tower of Magic. There is none so old they cannot learn, and none so young they cannot teach: All are students here, each enriching the lives and experiences of one another. We dedicate ourselves to the search for knowledge and secrets in all forms throughout the realm. Those who wish to join the Magi can expect a close-knit group who work with one another for the betterment of all. Player-killing is not the focus within the Tower, but is a reality of the Realm that will be dealt with decisively. Interested parties should seek out one of the Magi-Adept, or Isolas himself, to learn more of this followings guidelines for behavior, and requirements for entry. More information can be located at: http://tfc.isolas.net".

January 20, 2006: Isolas embraces the Nashite faith, on the auspicious occasion of the Black Conclave's 10th anniversary. His following is then known as the Nashite Magi.

December 14, 2006: Isolas grants Ordainment to Totec with the title of "Wraith."

January 27, 2007: Isolas grants Ordainment to Turalurayay with the title of "Oracle."

May 3, 2007: Isolas grants Ordainment to Kaleb with the title of "Wraith."

October 05, 2007: Isolas grants Ordainment to Kodak with the title of "Warlock."

November 27, 2007: Isolas grants Ordainment to Matthias with the title of "High Priest."

August 03, 2008: Isolas grants Ordainment to Homicide with the title of "Hitwoman."

April 01, 2010: Isolas grants Ordainment to Quick Artigo with the title of "Smoke Monster."

February 5, 2011: Isolas grants Ordainment to Marian Barbosa with the title of "Myrddraal."

December 12, 2011: Isolas grants Ordainment to Selune Crimsonmane with the title of "High Priestess."

December 21, 2011: Due to Boromir's refusal to sell Totec's soul to him, Isolas names the Nexus as the Nashite Magi's only enemy. He notes that they will remain so until Boromir agrees to sell Totec, or until "bodies of his followers are stacked so high and so deep that his temple door no longer shuts correctly."

January 20, 2012: Isolas grants Ordainment to Raquith with the title of "Executioner."

May 14, 2012: Isolas grants Ordainment to Daedalus with the title of "Destroyer."

February 1, 2013: Isolas leaves the realm to begin a personal quest for mastery in the dark arts. This quest is overseen by Lord Nash himself, and Isolas is placed under the direct guidance of the Arch-Lich for the duration.

As this realm's Pontiff, he is now the ultimate authority in all
matters of the Nashite Faith. He has complete authority regarding
Nashite weddings, ceremonies and the power to excommunicate.

Lord Isolas now only answers directly to the Council of Lord Nash.

Isolas is an honored member of the TFC pantheon and we
will miss him. He is retiring with 10k+ hours served as
DemiGod and this is a remarkable achievement.