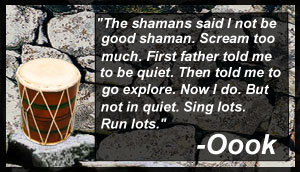 The Song Of Oook

Extra Description: Amulet Bag
Crafted to be worn upon a plain thong around the neck, this amulet bag is
nearly devoid of decoration. A small design of coarsely handmade beads of
some kind of green stone forms a spiral upon the front of the tiny pouch,
and here and there, bright feathers dangle and sway. Various small items,
each with their own meaning and purpose, have been stuffed into the pouch
and cause it to bulge outward. Only a small knot of sinew wrapped tightly
around a large bead holds the amulet bag closed.

Extra Description: Contents
It takes a long moment to manage to open the amulet bag: the sinew that binds
it closed has gotten wet at some point -- most likely drool, spit, or perhaps
some ale or grog -- and shrank. But once the clasp is loosened, the contents
spill out into your hand:

- a tiny mouse skull, somehow intact
- a bit of bright string, tied in a strangely purposeful pattern of knots
- a single white whisker, perhaps from a cat?
- a fragment of pottery, the colors faded and ancient
- a tiny carving of ash wood, crafted in the form of a weasel
- a small bit of sage, the leaf dried and brittle
- a smooth stone taken from a stream bed
- a dried claw from some form of bird
- a small silver charm in the shape of a spider
- an origami crane

How you're going to fit them all back in, is entirely beyond you.

Extra Description: Beadwork Spiral Pattern
It's difficult to discern what type of stone was used in the crafting of these
beads. They appear to have been made by hand, carefully chipped and rounded, a
tiny hole drilled in each (though some aren't exactly centered). They are not
of emerald, or tourmaline, or jade...what they might be eludes you. Spiraling
inward, the beads form a neat coil that almost reminds you of a serpent biting
its own tail.

Crafted with gratitude and thanks for Oook -- For all his hard work on behalf of the
Chosen of Fate, by the hand of a proud Goddess on 2am on Searynx the 11th, the month
of the Deities' Wrath, in the year 2607. (Friday, August 8th, 2003.)

Extra Description: Names
You dare not examine too closely the three Names bound here -
though you know it is their shadows only, not the true Names,
you can feel power that would shatter you in an instant if no
protections warded you. Cloaking the Names from mortal sight
(or perhaps cloaking you from the Names) is a complex weaving
composed of six strands of hair and elusively familiar scents
of sacred blooms.

Extra Description: Songs
You are swept up in a thousand songs at once. Though the tumult
is overwhelming, there is no sense of cacophony. Rather, you're
uplifted by the power in each melody. Some throb and pulse with
a primal rhythm that shakes soul and body alike. Impossible not
to whirl endlessly in thrall to such might - but then, a subtler
swaying chant seduces you, and you find yourself curving, caught
up in stretching circles and lilting grace you never dreamed you
possessed. As each melody captures you, holds you, releases you
and spins round to hold you again, you feel the songs' intricate
power weaving new paths through your soul - paths you will spend
your life traveling and understanding.

Extra Description: Strands
One of the strands of hair is brilliantly silver and glows to
even the most mundane eye with more than mortal radiance. As
your finger brushes across it, you see the Lady who wards you
and knows better than any what path you will weave. The next
four strands bring glimpses of holy N'Kai and the sacred ones
who make it their home. Touching the last strand, you see an
elf, her hands moving in sinuous curves as she Weaves.

Extra Description: Scents
The scents of the blooms sacred to the Three drift together
on the air, reminding you of all you hold sacred.

The Songs of Power and Three Names -- This log details the quest that Oook completed for this restring. It was created on the spur of the moment by Ananasi and Cordir.