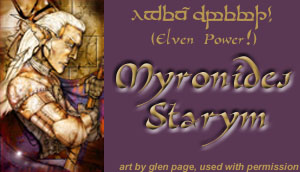 Mar 15, 2002
Before you stands an elf that almost tops six feet, his long black hair is streaked
with a silver that mirrors that of his eyes. an Ogre Tusk necklace hangs around
his neck, and a glowing weapon of natural power rests in his hands.
Myronides is bathed in the essence of charisma.
Myronides is in perfect health.


July 9, 2002:
Perfection of elven form, coupled with the wisdom and knowledge of the ages merge to
form the pinnalce of elven ideals and belief. Flawless. Looking into this gods
eyes you see whorls of water, fire, air and earth rotating in an endless void.
Myronides is bathed in the essence of charisma.
Myronides is in perfect health.

(Log by Cordir)
Clue says (in old-common), 'Myronides was running down vamps and Kindred ... said we were "semi-intelligent zombies" ... '.

Clue says (in old-common), 'Lanfear told him "If you don't stop talking about my sister that way, i'm going to ignore you."'.

Clue says (in old-common), 'i wanted to tell him "You wouldn't talk 'bout vamps like that if Khore were here.", but Lanny convinced me to ignore him also'.

1996 - 2000:
October 1996: Myronides is part of the group that pushes Tokugawa to level 50.
April 1, 1997: Myronides reaches effective level 50, after 1086 playing hours.
February 20, 1997 - First Timeline mention: Myronides and Larry on cant.
October 1997: Myronides converts to 3x, and loses several levels.
April 27, 1998 - Myronides proclaims himself Emperor of Nature, and there's some discussion about that.
August 23, 1998: Myronides gets whomped on (or, "Daelin & BeelzeBub vs the Purple Myron").
September 23, 1998: Myronides claims that he can 'kill any three people.' Daelin disagrees. Poof! moments later, Daelin and BeelzeBub slay Myronides in Madman's office.
August 1999 A group consisting of Maimer, Abender, Berrin, and Myronides completely clears the Master's Tower and defeats the Master of Magic without a single fatality.
January 13, 2000: Myronides is kidnapped by Marisa and forced to marry her (at knifepoint!). Okk performs the ceremony.
July 15, 2000: A GT is held in Newport Beach, California, with Marisa, Myronides, Berrin, Tokugawa and Xaviera attending.

2001:
March 6, 2001: Myronides joins the Coven.
March 11, 2001: Myronides posts a Retirement note.
August 2001: Marisa reports that: he posted a note to the gods saying, "Someone changed my title from God-Like Emperor of the Elves to God-Like Ego. The correct title change would have been Implementor-Like or Greater God-Like Ego. For I have not yet met anyone who's ego approaches mine in any way." Don't you love how modest he is? :P
August 27, 2001: Myronides announces that the Nature Reunion will take place on 8/30 at 9pm Central, 7pm Mud Time.
August 28, 2001: Myronides is released by Bliss.
August 30, 2001: A Nature Reunion is held, and Rhina is unable to login as herself, so comes back as a level 1 named Aphra instead to attend the reunion. Attendees include: Aphra (Rhina), Myronides, Theoden, Tamar, Tonto, Dalaran, Solanthas, Khore, Lorali, Tokugawa, and Clumsyfool. Kerriariadne also stops by for a little while, and Elladan sends his regards.
September 3, 2001: Myronides is part of the 'Ball Crew' - who make 4,700 balls of light and put them in the pit. This doubles the number of items on the mud.
September 9, 2001: Myronides joins Tamar.
November 13, 2001: Myronides declares in a note: "Tynian you are my hero. Simple. HERO! I LOVE YOU!" (due to changes in PK Debt coding)
December 15, 2001: Myronides kills Felgrin to reach effective 50th once again! (Th:30 Cl:30 Ra:30).
December 16, 2001: Myronides completes mobmaster 30 (a dwarven warrior) and posts an immortality petition.

2002:
January 11, 2002: Myronides reposts his immortality petition, but accidentally posts it as an "immorality" petition instead.
January 15, 2002: Myronides asks for "art, poems, stuff on elves" to be sent to him for the elven power website he's building.
February 21,2002: Myronides is promoted to Ambassador!
May 27, 2002: Myronides becomes Attendant of Fate, (yay Myro!) and discovers that Kaldred makes a really good target for explosive ammo. Here's Myronides's official version of the log: "you're promoted to attendant, congrats!".
June 20, 2002: The Chosen of Fate ftell gets so silly and racy, it scares Myronides off the mud.
June 29, 2002: Myronides is promoted to Demigod! He starts the Neutral (sword) following of Tel'Quessir. Natilena is his first follower, and his initial following description is: "A following of the elves, by the elves for the elves. Tel'Quessir allows for a freedom bound only by a common elven heritage. 'The People' with their Minotaur and Gnome servants live as elves should, free and unbound their whims, hearts and a love of elvenkind to guide them."
June 30, 2002: Izzy, Brightbranch, Katja & Delan join Myronides.
July 4, 2002: Myronides' temple is installed. Legolas joins Myronides, as does Hiro.
July 14, 2002: Cordir names Myronides' following an enemy.
July 23, 2002: Izzy is ordained "ELF" by Myronides.
August 10, 2002: Myronides posts a note about an upcoming Chicago GT.
September 1, 2002: A GT is held at the ESPNzone in Chicago, Illinois with Myronides, Natilena, Boyardee, Solaron, Katrana, Humble, Faille, Plato, Shon, Snappy, Ambrose, Tazz, Wylin, Lorax, Maimer, and Lania attending.
September 2, 2002: Myronides gives the new Demigoddess Clue his advice for immortality: Myronides says, 'don't fall for the eat the sheep dung or sex change pills'.
September 8, 2002: Kay is ordained "Samurai ELF" by Myronides!
September 11, 2002: Khore Challenges The Elves - specifically Myronides - to choose a champion. Abe is chosen to be Champion of the Elves (even though he's a human). The contest turns out to be a battle of wits against Katrana, and Khore offers a prize of 100,000 coins to the winner.Here's how it turned out.
November 15, 2002: Myronides declares Mayhem an enemy.
December 10, 2002: Myronides declares racial holy war, bidding all elves to go on Crusade.