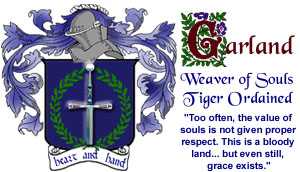 February 10, 2002:
The warrior that stands before you meets your gaze clearly, without shame or fear, and returns it with eyes of the darkest brown, almost black. His thick shoulders are squared, held with pride and strength and a courtly grace. At a towering height of three inches past six feet tall, his bulk might seem oafish on another, but he bears himself with skill and dexterity. It would be easy to imagine him as comfortable escorting a lady to the dance, as it would dispatching a wicked creature menacing the young or helpless.
His smile is gentle, his gaze gentlemanly and not lecherous. Well schooled in the courtly arts, this warrior-priest calls to mind the anticent tales of heroes who gave their all for the honor of a lady, or the protection of the weak. His eyes flash with bravery and honor, passion and loyalty, but his heart belongs to only the lady of his life, and his fellow Tigers.
A faint flickering light dances in the air before him. A slight frown creases his handsome face, and he raises a hand to lightly caress the shimmering aura. "Go in peace," he whispers softly. For a moment, he is surrounded by a bright, incandescent glow, as he grants the soul release from its torment. His eyes return to yours, and he nods solemnly. "Too often, the value of souls is not given proper respect. This is a bloody land... but even still, grace exists."
Garland is in perfect health.

December 10, 2001: A group of Tigers (Tiax, Charles, Garland, and Kantor) kill the lighthouse keeper and Queen Mariel, winning the 100,000 gold Tynian had placed on them and a spell crystal, and Tiax posts a note about the victorious Tigers.

December 12, 2001: DarkClaw dies in the Demon Realm and her sweetie Garland, Mandrake and Noctus go in and retrieve the corpse. Garland reaches Cl:27 Wa:20, and then uses 40 practices, getting ALL the languages to superb :P

February 12, 2002: Garland adds to the conversation on notes about Sober (a "Good" Dawnbringer) corpse looting Nyx (a Neutral), and sacc'ing the remainder to prevent a CR.

February 17, 2002: Rocky, by himself, fought a group of 5 others (Anduin, Legionaire, Paython, Drakar & Garland) and died. Late in the fight, Rocky firestormed and was taken down to "stunned" by the group. Since firestorm is an area spell, it hit Tokugawa (who was in the room), and Tokugawa accidentally ANNIHILATED and killed Rocky. After all was said and done, since there was no way to tell whether or not Rocky would have died had Tokugawa not squashed him, Rocky got his corpse back, and the group involved got something for their trouble.

February 27, 2002: Calivax dies on the River of Dispair, and Garland tries to do a CR, not knowing a scumbag has already stolen the corpse. There, Garland dies to Scairz. Mandrake performs the CR of Garland solo, beating Taibh and Noctus on the run to rescue the corpse.

March 12, 2002: Tranquility: My thanks / Tue Mar 12 10:09:49 2002/ To: all - I had the fortune of meeting a mage mob today. Bubba, Garland, Korsk, Lins and Paython...without your help I would not have survived. Thank you, so very much for answering the call for assistance. It is my hope that your gods cherish you as much as I do. - Alive and kicking, Tranquility

April 3, 2002: Garland gets Fire Elemental as the target for his mob mastery for the 16th time in a row.

May 25, 2002: A GT is held in New York with with Aslan, Belsambar, Craige, Dart, Garland, Nicolas, Talyn, Virez and Zoah attending.

June 21, 2002: Garland accidentally kills Tiberius in a spar in the temples, and gives the corpse back.

June 23, 2002: Garland and Fenrir do a corpse retrieval from demon realm for Cygnus while Marisa whacks on his demons for him.

October 18, 2002: After some "very kind words and help", Garland announces that he's unretiring.

December 3, 2002: Garland has women fighting over who gets to wizmark him at Mish.

December 27, 2002: Garland takes up a collection to purchase Alex 300 bounty hunters, but sadly does not reach his goal. December 29, 2002: Cordir posts "The Time for Oaths", which refers to the upcoming wedding of DarkClaw and Garland.

May 23, 2003: Garland joins the [[Chosen of Fate]. Scave dies in the icy wasteland and Garland performs the CR... only to find Scave died there twice, and he grabbed the wrong corpse. So back to the Wasteland he goes, to find the correct one, at the feet of the Ice Wyrm.

July 16, 2003: There are quite a few comments about EC being replaced, including Garland's note.

August 7, 2003: Garland dies in Master's Tower, and gets his corpse retrieved. He then posts a note to all saying, "Valin, Vex, Alucard, Azeworai, Aoife, Indiga, Roen, all my thanks go out to you guys for diving head first into Masters tower to get my corpse."