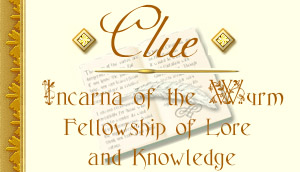 The form of an ancient elf stands before you, lithe and strong. Her eyes are bright and wise, filled with wonderous stories to liven a thousand gloomy campside nights. While many scars mark the pale canvas of her skin, she has a comfortable beauty about her, and you recognize the glow that comes from self-confidence and knowledge.

Removing the battered helm from her head, her golden hair flows down, bound in a tight braid to prevent undue ruffling by hands prompted by Mischief. Her demeanor is quiet, though wisdom and experience are readily apparent to the onlooker. There is something about her, though, that speaks of sorrow; a deep loss of the heart, perhaps. As if catching your thought, one hand lifts to close around a heart-shaped locket kept safely tucked beneath the collar of her mail. "Rigel," she whispers, and a expression of mixed pain and joy flickers across her features. Not wishing to intrude on such intense feelings and memories, you look away.

"Perhaps it was Chance that took him from me, perhaps the Lady Fate. I do not ken why. But I endure on, and in me, he lives," she murmurs (in old common). "There is much for me to do, yet; lands to explore, folk to aid, knowledge to gain, and friends to make. He is waiting, and one day, we will be together again."

Mortal: Written by Cordir, Date Unknown:
The ancient elf before you looks weary, as if all of the years she has lived were more burden than joy to her now. Her beautiful dark eyes are rimmed with red, marked by tears of mourning and loss. Shoulders slumped, she seems more crumpled in upon herself, than her usual strong, lithe joyfulness. A startling white band of skin upon the third finger of her left hand shows where a ring, worn for longer than most immortals have existed, was once worn with pride. Hand trembling slightly like a rowan tree in the wind, she brushes back a lock of red hair that has come unbound from its normal tidy braid. Her lips move silently, whether in some pleading denial, or a prayer for strength to endure and persevere, you cannot discern. Sorrow surrounds her like an intangible cloak, yet she stands alone, inconsolable, rejecting comfort even from her beloved Goddess or fellow Chosen.

Long before official birth records were kept, Clue was born in a small sea-shore village. She is an anomoly; with an elfin mother and human father, she should have been half-elf. Instead she has a human appearance (with long red hair and emerald-green eyes) and an elven mind-set. Her mother, an elfin High Priestess, was taken (whether willingly or not is unknown) from a Southern Continent elf city to be child-bearer to a human sailor/adventurer. When the little village was attacked by marauders while the men were away, Clue's mother gave her life to protect her infant daughter. Essentially orphaned, Clue was taken first to Thalos, then to Midgaard, where she was reared in an orphanage. She was trained extensively in healing arts, and as she grew, became quite reknown as a healer. However, she must have inherited an adventurous spirit from her father, as she seldom turned down a chance to explore.

As she approached maturity, she had many proposals, but she had eyes only for a tall, wild elfin mage named Rigel. Rigel was then a follower of the demi-god Cerebus, who appeared to Clue one day outside of Midgaard's East Gate. After a long discourse with Cerebus, Clue sought to join his followers and was accepted into the Court of Justice. Her joy at being accepted was even greater when she discovered that Rigel was also a follower. Rigel finally proposed marriage and Clue became his bride. Rigel taught Clue how to fight and she grew to be quite a warrior, also.

Clue gained much experience with many great adventurers. Among these were Syrinx, Jaator, Myronides, Shoya, Elrandir and others. Some of her exploring partners even went on to obtain immortality. These included Lorna, Masher, Cordir, Jerald, Tokugawa and Pyros, and much later, Steelblade, Solanthas, Tripper and Nicademus.

When Cerebus retired, Clue studied the tenets of several immortals, and asked Lorna to accept her into the Flying Tiger following, where she rose up to become a member of Lorna's High Council. Sometime during this period, her beloved Rigel vanished from TFC for an extended time, leaving Clue essentially husbandless. She remained true to his memory, refusing several offers of marriage, knowing that someday Rigel would return.

Lorna was looked favorably upon by the Implementers, and was raised above the Following-Level. Clue then foundered for a while, eventually deciding on a recently returned friend, Masher and her ITK following. Masher's presence became lessened and Masher was considered to be retired again.

After much self-searching (which included long discussions with Cordir about her teachings, and with Tamar about self-honesty) Clue approached another long-time friend and mentor, Nicademus, who had just been raised to demi-god, and she was welcomed into the Temple of the Winds. While she was in Nicademus' following, she achieved Cleric level 30, assisted by Whitehawk. When Nicademus grew restless he also retired, leaving Clue without an Immortal to worship for the fourth time.

Clue once again sought out her long-time friend and mentor, the Lady Cordir, to learn more of the Triat Lore. She had felt the influence of the Weaver in her life for some time and wanted more understanding of the guidance being exerted on her. Clue was warmly welcomed by Cordir, the Incarna of the Weaver, and felt she was finally at home. She worshipped Cordir and was accepted into the Chosen of Fate, becoming the Weaver's Priestess. With Cordir's guidance and help from many of the Chosen, Clue levelled warrior to 30, reaching the highest plateau a mortal cleric/warrior can reach. Clue found her proper duty to the Three in teaching her fellow Chosen and assisting TFC's new players with food and spells.

Rigel did eventually return to TFC, and Clue's joy overflowed for a while, until Rigel announced that external (read Real Life) forces required that he retire and give up mudding. Clue was so dismayed that she took the most drastic action she could think of, seeking out Lord Khore (the Vampyre God, who had formerly led the Kindred following) and asking him to make her a vampire. Clue thus became Blood-Daughter to Lord Khore (and blood-sister to Darkclaw and Cirth, who were former Kindred in Cordir's Chosen).

Having no more need to acquire experience just to level, Clue sought out some of the stronger mobs, seeking to prove herself against them and achieved 82 MobMasteries. She then turned her thoughts to Immortality, petitioning and being accepted as an Ambassador.

After the required number of hours assisting the new players of the realm, she was promoted to Attendant and assigned to Lady Bliss' Coven of the Ashen Moon to learn the duties and methods of running a following.

Clue ftells, 'i asked Tynian earlier how much it would cost to have my personal just list wiped ... '.

Clue ftells, 'he said "Interesting ... i don't think anyone has ever asked that before"'.

Clue ftells, 'over half have retired or deleted'.

Clue ftells, 'i told him "i'm a complete pacifist in a Neutral following"'.

ENTRY:
A gentle wind brushes against you, laden with the scent of distant lands.
Your heart is filled with a sudden longing for new things, wanderlust, change.
A nimbus of fuchsia tinged light swirls into being, forming a portal.
Clue steps quietly from the portal, opens her journal, and readies a writing quill.

Short Description: the Rigel Star: a flawless blue diamond
Long Description: Within this deep blue diamond is a brilliant point of light: the Rigel Star.
Extra Description: Rigel Star
The intense color of this diamond calls to mind the azure gaze of a certain
wandering adventure of the First Age. Those who see it, and knew him, would
immediately see the resemblance between the twinkling of the Star within to
the twinkle that always lit his eyes.