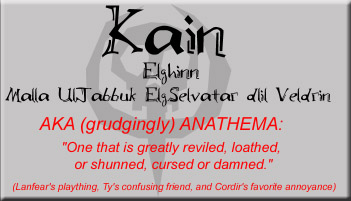 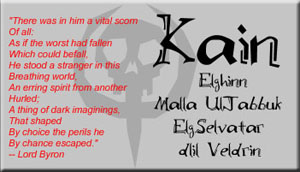 Cordir says, ‘Vorax! Would you rift Kain a whole bunch?’
Cordir says, ‘(allowing him to heal some between, of course)’
Cordir says, ‘just a for fun sort of thing, and tell him it has my name on it?’
Vorax says, ‘why yes, yes i will.’
Cordir beams.
Cordir says, ‘Can I watch?’

By a Crackling Campfire
[Exits: east south west]
A steak of Glorin, the adventurous seafarer catches your eye.
(Invis) (Token magic) (Glowing) A ward has been placed to keep heavy fog at bay.
(Dark Cyan Aura) Teluin is here.
(Dark Red Aura) Kain is here.
A warrior is here, practicing battle stances and weapon swings.
A demon slayer stands here, having absolutely nothing better to do.

Kain sniffs sadly at the way you are treating him.

Kain utters the words, 'sanctuary'.
Kain is surrounded by a white aura.

Tranquility pretends she is Kain and grumbles about being at 28 dam instead of 30!
Tranquility holds the back of her wing to her forehead.
Tranquility says (in common), 'oh, the woe'.

A large pity party is instantly thrown for Kain, the downtrodden.

The world's smallest band begins playing the blues to commiserate with Kain.

You say, 'Kain is a BAD BOY'.
You say, 'And I'm not talking to him any more'.
Legionaire giggles. Legionaire says (in common), 'whats he done now'.
You say, 'He's going on his 6th Anathema strike'.
Legionaire will give him a clip around the ear for you.
You nod. You say, 'Thank you'.

Arianas gossips (in common), 'who does everybody hate more, me or Kain?'.

Saruman gossips (in common), 'I hate myself mostt'.

Thingone gossips (in common), 'i wuv you both'.

You gossip, 'I'm with Thingone. I like you both.'.
You gossip, 'Though Kain is an annoying Anathema type person.'.

Kain gossips (in drow), 'we have a bet! you must pick one or the other'.

Lorax gossips (in common), 'Arianas for me then'.

Riella gossips (in common), 'i vote against arianas....hes ugly'.

Arianas gossips (in common), 'who is hated more? me or Kain?'.

You gossip, 'Actually, I can't say I hate you, Kain. You annoy the bejeebers out of me every time you're on Fjust, but I kinda like you none the less. = ( '.

Kain gossips (in drow), 'I gotta log off before vote is taken'.

Arianas gossips (in common), 'Kain, everybody hates you, don't fool yourself! they just don't wanna say anything'.

Garland gossips (in old-common), 'Hehe I agree Cordir, he attacks me all the time, but ya gotta luv um :>'.

Arianas gossips (in common), 'people aren't scared to say they hate me :P'.

[ 17] Treehugger: Kain killed me.
Wed Oct 17 05:09:04 2001
To followers of: Tripper
Kain killed me last night, it was dumb.
He swung MUTI DISEM on me, and i got hit by some pretty bad lag right then. Nail him! That's my second just on him and i'm too small*SNIFF* GOGOGOGOBIGTIGERS!(or just put stuff to the Treehugger donation group *grins*) Thanks all!
Treehugger. AAAAH! I'M NAKED, DON'T STARE! 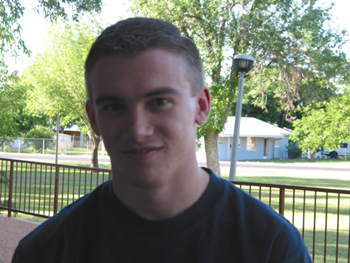 Kain plays from Arizona, and attended the GT held at the home of Tranquility.
(Source of the picture from 2002)