Vorax commissioned Cordir to create him a full set of restrings as an immortal: 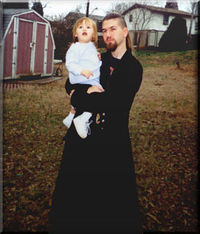 (As provided to the "Faces Behind The Names" Project, circa 2000)
Name: Ben
Location: South Carolina
Started playing some time in '97 because a couple of friends finally talked me into playing it. I didn't like it at first but they kept persisting on making me play. Sooner or later I got the hang of it and decided that I liked the game. My first character didn't get played much and has since purged. Vorax was made durring the summer the next year.