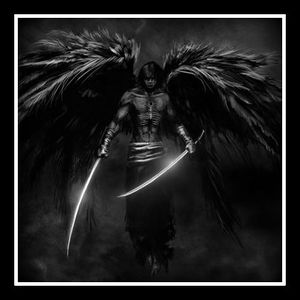 Image by Liciniosouza, on DeviantArt

Seraph raises his hand and a throne of bones rises from the floor.
Seraph sits on the throne.

Samiyah startles, and takes another step backward, gasping as she hits the wall unexpectedly.

Seraph says, 'when I was a child my parents were killed. I was about 8 at the time. I took to the streets of Midgaard doing whatever I could to survive. I meet up with a man and he took me in, fed me, clothed me. Trained me in combat. But everything comes with a price. I worked for him stealing - collecting items for him '.

Samiyah makes a soft sound of sorrow at the image of a starved, desperate child being beaten.

Seraph says, 'One day he told me to go collect from the weapon-smith so I did. When I got back I saw him talking with a huge ogre. I was spotted standing there and was dragged into the room. They beat me with a chain and whips until I was almost dead. They heated up a iron fork and came over to me. He said a person with no eyes has no soul for the eyes are the window to the soul - and pushed the burning rod into my eyes '.

Samiyah covers her mouth with one hand, her eyes reflecting the horror she feels.

Seraph says, 'that moment my soul left my body and I was standing before an angel. He said, ‘I feel the hate in you and I will help you'. He breathed life back into my lifeless body . He also told me how to steal souls for souls kept me alive'.

Seraph says, 'I was not dead and I was not alive when I came back I was an angel. The first soul I ever took was Marion'.

Seraph pulls a gem from his robe. It glows bright red.

Seraph tosses it to you.

Samiyah squawks and catches it instinctively.

Samiyah holds it in her hands like she would a dead, rotted thing.

Seraph says, 'he was the one who took me in'.

Tears seep from her eyes, staining her veil.

Seraph says, 'as the years passed I killed and collected souls'.

Seraph says, 'Then the Dark lord took me in under him I learned to harness my hate'.

Seraph opens his hand and the gem returns, absorbing into it.

Samiyah lowers her arms, unconsciously rubbing her hands against the linen of her robe, over and over.

Seraph says, 'Kerri made me a helm so I could see again'.

Seraph says, 'he used some of his immortal powers to create it'.
Seraph says, 'I became his Ordained and fought many battles for him spilling blood of the innocent. Don’t mistake my childhood as a tale of sorrow. It is a tale of vengeance. I am thankful for Marion - he unleashed me'.

Samiyah nod slightly and asks softly, 'What of your vows to Lady Mystaya?

Seraph eyes glow bright red.
Seraph says, 'hmmmm Mystaya. I loved her but she was my weakness'.

You say (in common), 'what about your followers?'.

Seraph says, 'After many years of killing and raiding towns my time came to become a god. When I took my rightful place among the gods I was torn apart'.

You say (in common), 'emotionally or literally?'.

Seraph says, 'Both'.
Seraph says, 'I lost my way to the power. I lost my focus. The souls I collected shattered within me destroying my mind and body'.

Seraph says, 'The Vir is an illusion. Something my mind created and took hold. Once the gods cast me out of the heavens I returned to normal'.

You say (in common), 'so the power of immortality was too much to bear?'.

Seraph says, 'I was not ready'.

Seraph stands up the bone throne crumbles to dust.

Seraph bends down, looking you dead in the eyes.
Seraph says, 'Because I like to'.
Seraph grins evilly at you.

Samiyah cringes back, her shoulders pressed against the stone wall as if to hide within it.

Seraph says, 'I want chaos and death. I want to stop as many people as possible from entering the heavens'.

Samiyah asks softly, 'Why? Does it make you feel better?'

Seraph says, 'yes it does'.

Seraph hand glows red. As he holds it close to your face, you can feel your soul slipping away.
Seraph pulls his hand away.

Samiyah reaches up and grabs a small, hand-made charm in her hair, and says quickly, 'Away with you!'

Seraph says, 'see, Samiyah? I can collect anytime. But I like you'.

Seraph says, 'why? Because you are skilled. People listen to you'.

You say (in common), 'Why do you care if people know your story? You hate them all..'.

Seraph says, 'everyone wants to be remembered. I don't hate you. That's why I will not take your soul'.

You look at Seraph.
You shiver.

Seraph says, 'You don't like me very much do you?'.

You say (in common), 'I think the soul is the only thing in life that is truly ours…. and that you would steal that, take it… I cannot fathom.'.

Seraph says, 'nothing is truly yours'.

You say (in common), 'I do not know _you_.. I do not like what you _DO_ You choose to be an instrument of pain. I don't understand that desire.'.

Seraph says, 'you choose to be a instrument of life through song. Same difference'.

Samiyah adjusts her veil to hide a smile, and murmurs, 'Though, to Anduin, one is as evil as the other.'

Seraph says, 'there you have my story'.