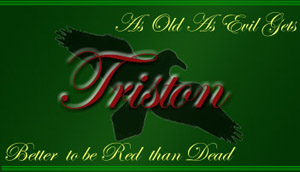 February 27, 2002:
A dark silk shirt clings to his upper body leaving little to the imagination. His muscles stretch the thin fabric across his shoulders and arms. The shirt tapers down to his waist and is tucked into black pants, tied tight with a thin belt with a small gold pentagram as a buckle.

Wavy black hair tumbles to his shoudlers, framing a face unmarked by the years. Triston's face shimmers with a god-like appearance, but beneath his two seductive, emerald eyes you can see a shade of passion not found in many mortals. It seems to lure you into his soul. A small twinkle glances off the reflection of the moon that reminds you of old memories that few can recall. A glint of mischief trails from his pupils to his wonderful smile that makes you feel comfortable and yet uneasy.

A smile appears on the edges of his lips, almost as if he was close to laughing. You glimpse his neck and see "G", "S" and a "K" tattooed on his neck. His left eye winks at you before you go about your way as he tumbles a gold coin up in the air and melts into the shadows.
Triston has a special twinkle in his eye.
Triston has looked a lot healthier.
Triston is using:
<used as light> (Token magic) a ball of bright red light

12/08/99: Triston actually logs onto the mud for the first time in longer than anyone can remember, looking for his wife Emaleth.

12/11/99: Triston visits again, and is quickly chased around by a carnivorous rose bush, rifted for old time's sake by an invisible Immortal, and given a Head Gardener to tend to his rose bush. He departs after gossiping, 'I must depart these realms lords and ladys, know that you are still within my heart...and Im sure Emaleth will drag me back from time to time *hugs*'.

04/21/00: Sargas, DarkClaw, and Triston visit the Realm for the first time in months

12/1/01: Kim is promoted to DemiGoddess! She starts a neutral evil sword following called the Slaves of the Heart. Her initial following description is: "Let the others quibble about logic and thought: The Slaves of the Heart have not lost sight of what is truly important - the wants and desires and emotions of the heart. If it feels good, do it! When things aren't fun any more, why do them?" Lexie is her first worshipper, Triston her second.

12/02/01: Strangely, Triston is reformed when he logs in, as well as several other new Slaves of the Heart.

12/30/01: Solaron announces that it's time for mud trivia, and Triston immediately asks, 'what does water and dirt mixed become?'.

02/03/2002: Cordir asks Triston when he’s going to ‘forgo all this evil stuff and join the Chosen?’ His response involves being raised to level 50 by a god+, seeing Cordir naked and getting sexual favors, a harem and a couple million in gold. Needless to say, she declines his worship.

02/23/02: Triston and Lexie leave the Slaves of the Heart, and join Kerriariadne.

02/25/2002: Based on Triston’s unreasonable expectation that she never play any other characters and his pursuit of Lexie out of revenge, Triston and Emaleth divorce. (In a twist of Fate, two months later, Zahar’s husband renounces Lexie when he returns to find out she’s hooked up with Triston.)

03/07/02: Dres is slain by the Ancient Blue Dragon. Keat and Triston attempts the CR, but Triston dies to the Dragon as well. Keat CRs Triston.

03/08/02: Triston completes mobmaster 33. Triston has an interesting experience as he is charmed in the Kitchen.

03/16/02: Kaleyah reports that "Triston and Lexie extricated me from the longship, where I badrecalled into a locked noteleport norecall room." Triston killed "a spirit of the traitor" for MM#39, and levelled at the same time to mage:30. Triston is slain by Khore, simply for fun.

03/17/02: Lins and Triston rescue Alrandolin from a locked room in Longship. Triston kills a servant for #40.

03/19/02: Triston posts "My blue eyes", along with a warning ;) Lexie's title is changed by a god+ to "Lexie's heart is beaten to a pulp by a mad god." (removing references that it was being haunted by Triston's ghost.

03/22/02: Lexie kills Triston & Khore (Or at least that's how she reported it.) Khore offers a prize to the first non-elf who can bring him a sharp wooden object. Kain shows up with a bamboo fishing pole, declaring it to be sharp and poky. Khore pokes Kain with a pole. Khore utters the words, 'rift'. Khore's soul rift *** ANNIHILATES *** Kain! Kain is DEAD!! Khore gossips, 'Nope, not sharp... but the rift was.' Moments later, Salim brings him a wooden stake, and wins the prize. Not satisfied until an elf is tortured, Khore has more fun with Kain, but announces him the winner in the "Stick Vs Kain" bout. Khore gossips, 'Sharp pointy ears no match for sharp pointy sticks.'. The games continue with Lexie pitted against Triston with a godweapon ... and more tomfoolery ... here's the log!

04/03/02: Triston asked Lexie to marry him, offering her a chocolate dipped cookie and she said yes! ( <worn on body> (Artifact magic) (Heathen) (Chocolate-dipped) a large cookie). Concidentally, Zahar logs on for "the first time in eons" and flips out when he hears the news: Zahar: me again - Wed Apr 3 17:54:30 2002 - To: lexie all - Unfortunately my note was sticken before many people got to read it : ( It is not my fault that women are unfaithful... But I will say no more on this matter as not to anger the gods. So I hope everyone had a happy passover and easter! - Z

04/10/02: Lexie retrieved Fraser's corpse from Kharad Delving, and she & Triston gave just about everything back. (Fraser is a member of Wisdom). 04/29/02: Kaldred & Triston get a little wild, showing off who is more sexy. (This results in Kaldred being smacked around by Cordir later this week.)

03/29/02: Triston kills Caest the Obsidiansmith for MM#47 and level 29. (Th:29\Wa:30\Ma:30). Tokugawa holds some teleport races (where everyone drinks from a teleport fountain and races to be the first to return to Toku.) Poor Thingone has terrible luck, teleporting to a locked room, the ocean, a cave, the plains of shifting grass, & underwater :P Clue is teleported to the Lower Hall. Winners of the games were Triston (twice) and Belsambar.

02/08/03: Triston gets naughty on gossip, offering himself to Ginny during one of her rare visits.

02/16/03: Sheep invade the guild hall, and neither Natilena nor Triston will admit to owning them. This somehow leads to talking bunnies: ### [Natilena says (in common), 'A small bunny tells you, 'no potions for you!'.'] Natilena gossips (in common), 'oh the horror! I tried to tell everyone the bunnies where smarter then they looked! now they're.. TALKING'.

02/28/03: Triston posts a story about "Ambassador Triston" to the Forums. Riella, Triston & Natilena get bored (and Marisa is apparently sex-changed).

03/04/03: Triston must be going ambassador-crazy already, because he gossips, 'Are you lost? Do you find your hometown confusing? Do you type the wrong commands in and end up fleeing? Well order Triston's new book, "How not to be a newbie" only 10000 gold'.

03/14/03: Triston reports that he and Katrana and went skinny dipping in Majere's pond today, but Katrana vehemently denies this allegation, saying the new Ambassador 'just has a want to see me naked.'

04/11/03: Triston reports that he "started a forest fire by Ofcol, but Tynian rebooted the mud and put it out."

4/18/03: Triston is promoted to Demigod! He starts the Lawful Evil following of Sin, and his (huge) initial finfo reads, "The act of sin is an offense to those of a certain moral standard. The followers of Triston don't believe in moral standards, but seek to indulge in the manufacturing of a sinful nature. While all sins are welcomed into the following, a sinner indulges in one of the following seven deadly sins listed below. Vanity: is excessive belief in one's own abilities. Representative Color: Lavender. Envy: is the desire for others' traits, status, abilities, or situation. Representative Color: Green. Gluttony: is an inordinate desire to consume more than that which one requires. Representative Color: Orange. Lust: is an inordinate craving for the pleasures of the body. Representative Color: Blue. Wrath: is manifested in the individual who spurns love and opts instead for fury. Representative Color: Red. Greed: is the desire for material wealth or gain. Representative Color: Yellow. Sloth: is the avoidance of physical or spiritual work. Representative Color: Light Blue. Following members are expected to do some role playing to keep the essence of the following true to the game. A character's name must reflect the day and age of which it comes or have a plausible role-play explanation as to why the name is viable. A quest or other form of initiation may be required to determine if your soul will embrace a sinful nature. All this can be superceded by Triston at any time under any circumstance.". His first follower is Flux. Dazael is among those who are accepted that first evening.

05/01/03: The winner of Triston's following title contest is announced, and its "Serene (Drop your linen and start your Sinnin)"