Standing serenely, Aslan looks at you with her soft blue-green eyes. A mystical light seems to follow her, creating a light halo around her golden-red hair. She lights a match, and holds the flame up for your viewing. Upon gazing in the flame, you see the same fair woman, sitting at the base of a large blossoming tree, holding a small elven baby to her breast. To the right of the lady, stands her tall elven husband. Tall and beautiful, Talyn's steady gaze pierces your soul, as he decides whether you are friend or foe. His eyes wander to his wife and child, and a look of overwhelming devotion, tenderness and love fills his face. To her left, stands a beautiful half-elf of incredible grace. A steadfast wolf stands beside Darkfang, and you listen as, Darkfang says (in common), 'At last, we are together' and she smiles at the wolf.
The wolf looks on as two large cats play and vie for Aslan's attention. One, a huge lion, prancing around, shaking it's regal mane, and the other, a tiger, prances about searching for some steaks to fill her belly. The earth seems to shake as both kittens let out thunderous purrs of contentment. The vision blurs. Realizing that a spider's thread has blown in the way of the flame, you search for the thread's keeper. Dark and mysterious, the spider lowers herself and stares at you with her eyes. A quick draft blows the spider and her thread out of view, also burning out the flame. *I am Aslan Tsarran-Napei, daughter of Jyslin Tsarran, sister of Darkfang Elvenwolf-Tsarran, wife of Talyn Napei, Servant to the Lady Mistress Cordir An'Shalach, Kitten of Tripper the Master of Tigers.*
Aslan is in perfect health.


August, 2002:
The brilliant, haloing light of her aura causes the woman before you to shine like a candle flame in the darkness. Embued with the strength of the Weaver's blessing and Ordainment, she is a study in quiet determination. Her pale blue eyes, the color of Loch Raven's waters at noon, are filled with merriment and welcome... but like the waters, hold depths of character and emotion that are deeply hidden beneath the surface. Still in some ways as innocent as a fawn, she has known the greatest of hurts and losses, teaching her the perseverance of a Weaver. A crown of fiery bright red hair tumbles around her face, giving the appearance of a fey creature of faerie tales or that of a maid waiting an eternity for her knight to return, an impression strengthened by the delicacy and smooth porcelain of her complexion. Though clothed in armor, she gives an impression of courtly grace, sweeping skirts and veils. A woman able to hold her own amidst a field of battle as the intimacy of a storytelling circle, or a kitchen cooking for friends and family, or a sprawled on the floor tussling with a pair of puppies, she is ever growing, ever changing, ever becoming the Wyrm's chosen Avatar.

(written for entry into the Chosen of Fate)
My name is Aslan Tsarran. My birth father was an adventurer who was unhappy with what his life in the Realm offered him. I suppose that had my father not been happy, I wouldn't be. By chance, he ventured into thre Spirit Realm, once there, he strove to bring back as much as possible. *fondly remembers* One of his favourite artifacts were The Chronicles of Narnia, by C.S. Lewis. He loved them for the moral and ethical lessons that may be learned and appreciated. When he returned to this Realm, he decided to marry, and produce heirs for his House. I am, of course, the eldest. Both himself and my birth mother strove to teach the lessons to me and my sister. When my mother died, he isolated himself more and more, until the day that he left. I believe that he got back into the Spirit Realm, and lived the rest of his life there. *sigh*
Ever since my mother died, I have tried to learn from the tales, in remembrance of my late parents. I've gone through my ups and downs, but whats keeps me going is taking care of my sister. I know that it has been harder for her than for myself. I try to show of empathy towards others, just as Lewis' Aslan did. I admire the empathy he showed Digory Kirke, and the amount of grief that he felt for the boy. His willingness to give to others, even if they mightn't accept his help, like the Dwarves, has always left an impression. Thought, I hope to move closer to the extent that he helped Edmund, by sacrificing his life for another, I honestly don't know. I hope to meet someone that I really would sacrifice myself for, for then, I think I could be truely content.
I don't only value empathy, but I also want trust. I try to start with trusting everyone, and if they breech my trust then they have to rebuild my trust in them. I also think that it works the other way around. *ponder* I don't think that that completely says what I mean. Your trust for a person builds, but it doesn't start with no trust. *thinks to herself* Yes, that is what I mean. *smiles nervously* I think that those are some of the values that my adopted mother, Jyslin, saw in me and admired. It was just a couple of weeks ago that she adopted me and my sister, Darkfang. I find it a real comfort to be able to be of some help when I am around. And I also love having a place in the Realm that I belong, if not physically, but in the hearts of others as well. That, I think sums up myself as a person. *passes the story book along to the next person* 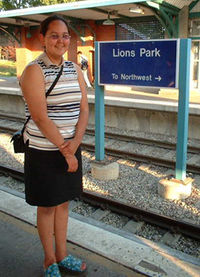 (Taken from the "Faces Behind The Names" pages, dated around 2000)
Hiya! I had the chance to learn of TFC when I went to University of Alberta, Edmonton, Alberta, Canada. I volunteered for 'Safewalk' and one of the chicks I frequently saw in the Safewalk office would be playing TFC. So I tried it... And soon loved playing. Playing TFC has given me the chance to meet some really grooving people... (Darkfang, Tyrell, Nicolas, Belsambar, Talyn, Packard, Craige, Garland, Grale) not to mention the grooving people I'll be able to meet in the future ;-) Alrighty all, cheers!