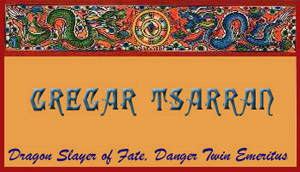 Description While In Fate:
A tall Aarakocran hovers before you, wings holding him effortlessly aloft. He is not the biggest specimen you have ever seen, but his strength and capability are clearly evident. His feathers are gold-dappled brown, and upon each wing you notice a mark. The right wing bears an indigo Ward, proclaiming his Covenant with the Lady of Fate. The second is harder to identify... finally, recognition comes - the symbol of House Tsarran. You blink. An Aara? In Tsarran? Then you recall the tales: the lady long gone, its lord all but, and two sons, one of flesh, disowned, another of spirit, acknowledged.
A chaotic swirl of emotions dances in his gaze as he catches you looking so boldly. Truly a child of the Triat Wyld, though tempered by Weaver's honor and Wyrm's growth.
Suddenly, a roar shakes the very air, and he seems to brighten. "Ah, that would be my ancient green friend! Nothing like a dragonfight to start the day." He summons spells to cloak and ward himself, then flies off, leaving you to wonder if his glee and recklessness are but masks to cover something deeper...
Perhaps you will never know.

07/08/2001:
Wings curled protectively about him, this aara does not stand tall and proud like most of his race. Rather, he is slumped with the weight of the shame he has brought upon himself and others. Eyes unfocused, lost in memory, blinded by tears, he unconciously rubs his upper arms where, upon each, once a proud symbol pledged his devotion to his House, T'Sarran, and his faith, the Chosen of Fate. Now, like his soul, only scars remain. If only they could speak of it, for certain as the sun will rise, this student of the Wyld will not, not now or ever.

03/04/2002:
His wings curl somewhat protectively around him as the Aara before you gazes at you, eyes narrowed somewhat. His thin arms fold over his chest, baring twin scars where once, proud symbols pledged his devotion to a house - T'Sarran - and a lost faith - the Chosen of Fate. Scars marr his arms, legs and torso, the deep runnelling marks left by his favorite prey: dragons. He smiles, almost recklessly, and offers a welcoming hand. "Gregar." He snickers as it briefly bursts into blue flames, blows them out, and offers it once more, a twinkle in his deep yellow, falcon-like eyes. A light breeze causes a small gray feather braided into his hair to brush across his face, making him sneeze. He gently returns it to its place, smiling at the mark of trust and friendship given to him by his apprentice. "May Fate guide you, and Chance make life interesting." With a flourishing snap of his wings, the Tiger turns and takes flight.

This land is repleat with the sins of the hordes, though none greater than those against your own brethren. Would be foolhardy to reopen the wounds by delving into their details. Suffices that sacrafices were made, and the prices were paid for mine, as well as others. Within each punishment, a new birth was found, a cleansing of all through the powers of the Wyld. Even the strong spirit of the Weaver succumbed to the will of the Wyld eventually. With it, the weaver incarnae and her fold found themselves anew. It was during this time of strife for the triat, that I, Gregar now of the unamed family, found my own divergent path among the fold of the Tigers.

I joined the tigers with my hands bound. Too long had I enjoyed the shelter of my neutrality. The gods did not see fit for me to be unleashed unto the realm and start the bloodlust I longed for. I held no delusions of grandeiur, I knew no one would fear me. Being a shaman who had recently started learning the ways of the warrior, I was weak and inneffective against my foes. This didn't stop me from trying. Twice I had managed to place the heads of my enemies before the altar of Tripper, for the gods are not without mercy. They understood mitigating circumstances and allowed me to provide vengeful retribution against those who had wronged me. In one case a petty thief, barely old enough to reach my pocket found his way to another Tigers' belongings. The item proved to be a holy object. A non-follower carrying one of our holy objects was sacrilage of the most intolerable sort. The gods saw fit that I might extract vengance for our following. Turning the wrath of a ghost upon the unsuspecting whelp, I waited in magically cloaked silence until he ran from his safeharbor to dispose of the haunting menace. Already weakened from the ghosts life drain, he was an easy target. I watched the fight start, then summoned all my power into a flare, sending it into the hapless thief, I wrenched his soul to and fro, tattering him like a leaf, and leaving him dead at my feet before I could draw my sword to press the attack.

That was my first kill from leaving neutrality. it left me giddy. Some would say it was without honor considering the large difference in age and abilities. Perhaps, but the thief knew what trouble he was stirring when he decided to steal. I feel no remorse for him or any of the others. Yes, there is the blood of others on these hands. How many, I could not say, not because I lost track in the countless thousands, no I was never that good, probably a quarter as many as most can claim, most likely even less. I just never bothered to stop and count. I was more interested in finding an outlet for my uncontrolled rage and new found sense of vengeance for the righteous.

I think now perhaps it was a way oif forgetting my sins and the friends I left behind. Through it all I did not forget how I had arrived at my new station. I lived such for a long time payhing heed to my new family but never forgetting my roots, but the Wyld again, found it's gale force, and started change. Tripper was absent more and more the tides of dark knew as much and began to swell. A following is nothing without it's god, Trippers tigers waned as an influence in the realm, until they were almost gone forever. Gregar left the realm for some time as well, when he returned he found the tigers only a shell of their former selves. He checked in occasionally to look for his old god, but never found him. Though loyal, I could not find what I needed in the Tigers anymore. I took Cordir's offer to join her new following.

So I stand here now, on the brink of my new adventure. More learned, a bit less eager to spill blood, but still Gregar none the less. Danger twin, spontaneous, and part of the peanut gallery in the back of each town meeting. I'm ready to rejoin my old comrades in the Chosen.


Gregar took new Geasa while a member of the Tigers:

Gregar... You walk the Way of the Shaman, one of reflection, and self-mastery. Yet each Student must have a Teacher to learn from. Thusly, I ask you to seek out and learn from each of the Shaman described below...

Find each of the following Shamans, and slay them, bagging them.
In Skor'lanis, this one walks, guardian against strangers.
In deep Mines, this Goblin paces in a trace, yet alert to you.
On distant Isles, this Student seeks to learn of nature's ways.

Lastly, three Shaman have Ascended to the highest rank - Immortals. Learn their names, and in the case of two out of three, ask them what the best advice for advancement and survival they can offer would be.

When all of these tasks are complete, then you will have earned the boon you seek.


[ 0] Gregar: my shame
Thu May 4 19:46:39 2000
To followers of: Cordir
I have shamed myself, the lady and the following through irresponsible actions. I mocked NASH, not only insulting the god of many but insulting and humiliating the lady as well.
I would like to apologize to fate, my actions were not the responsible ones expected of a member of fate. I am truly sorry, for any pains caused to other members of the following by my actions.
In pennance I hereby make the following 3 geas:
To squelch the wyld which caused me to humiliate the following so, I hereby will not speak to anyone save the lady for a period of 3 weeks.
To repay karmatic debt to the weaver which I dishonored, I shall not wear anything but a weapon and a simple ball of light until level 6 warrior.
To make sure ignorance never speaks for me again, the wyrm demands that I learn of NASH for a period of 3 outrealm weeks.
such is my dishonor, such is my pennance
gregar