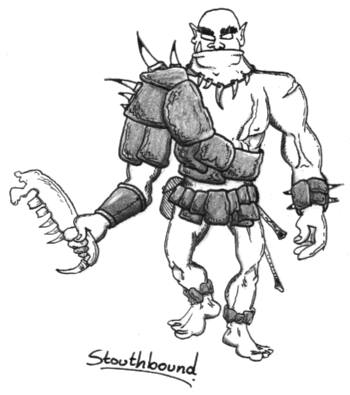 Art by Jerome the Artist

[ 16] Stouthbound: The Praises of Lord Nash

Tue Dec 7 21:27:13 1999
To: All worshippers of Lord Nash, admitted or not
In light of the Conclave and Vecna's recent ventures into the Demon
Realm, as well as in the light of Rubicant's dimwitted comments, I would just
like to remind the heathen amongst you all out there how we did this.
We did it with skill, we did it with sheer power, and we did it with ease as
only the Conclave could manage to pull off.
However, and -most- importantly, we did it with the blessings and in the name
of our Lord Nash.
On behalf of the Conclave, I would like to hail the Arch-Lich, Lord Sirak, and
above all Lord Nash for their guidance and strength during our ordeal.
It was our charge and purpose to seek out the "King" Ebencaleneezer.
We did so, and in doing that, showed him and the rest of the realm the glory
and power of our great Lord Nash. Realize this, heathen:
Hordes have fallen. Demons have fallen. Dragons have fallen. Kings have fallen.
All have fallen by my hand and the hand of the believers of Lord Nash.
Praise Lord Nash for allowing us to accomplish our goal, which none of you
heathen saw as doable!!

Stouthbound, Minion of the Arch-Lich,
Proud worshipper of Lord Nash

(Description found here)
Before you stands a hulking beast of an ogre. He is covered from head to toe with tribal tatoos and ornaments made from various body parts of animals. You notice his strange clothes. He is wearing what seems to be a leathery cloak wrapped around his body, upon closer inspection, you see little holes all over it...they look like eyeholes...gruesome. The cloak he wears seems to be made from the sewn together hides of dead dragons. He looks at you, squints a little bit, then checks the tail of his cloak. "Not a dragon, but it'll do!" he grunts, an evil smile coming across his lips. Charging at you, he screams in a deep voice "I hope you choke on your pride when I make you swallow it!"


November 15, 1999 - Stouthbound wins a boat race challenge set by Lorna, beating a field of 24 mortals to float across the Ocean, without death, deliberate movement, or other disqualification.


December 5, 1999 - Stouthbound is part of the group that takes up Lorna's challenge and slays the entirety of the Demon Realm: The Fall of A King


December 20, 1999 - Stouthbound has a ritual part in the wedding of Whitehawk and Aoife. <LOG>


January 22, 2000 - Stouthbound has a ritual part in the wedding of Katrana and Rashiel, and logs the event for the timeline.


January 26, 2000 - Stouthbound goes down in history as giving the most messed up zombie concert as his bid in one of Lorna's chance auctions: Stouthbound and His Zombies.


February 7, 2000 - Stouthbound wins a game of Teleport Roulette, choosing the Trading Post. He wins 76,000 gold. Stouthbound also slays the Divine Theologian for Mob Mastery #86, and makes the largest known zombie (thus far) in the history of TFC, without use of a fetish.
Stouthbound's group:
[31 Mob] The zombie 488/ 488 hp 0/ 0 mana 100/ 100 mv 0 xp
(Charmed) (Red Aura) The rotting, animated corpse of a divine theologian drools on you.


February 22, 2000 - Stouthbound slays the Divine Warrior of Emdeeville for his 89th mob mastery.


February 28, 2000 - Trakker, Stouthbound and Vecna become the first to ever kill Scairz.<LOG>


April 26, 2000 - UuKrul of Pain breaks Nashite Law and attacks Rath, and later takes part in the murder of Mordith, gaining him excommunication from the Nashite Faith. The Arch Lich orders his immediate death for breaking the Nashite Laws, and within moments, UuKrul dies on Stouthbound's blades.


May 1, 2000 - Trakker mobdies dies due to a stupid mistake of Cordir's. Stouthbound and Brenick make their way deep into the Dream Realm to recover the corpse, while Alucard and another attempt to hinder recovery efforts.


September 12, 2001 - Wolfgang reaches Effective level 50and ties with Stouthbound for #1 on the mobmaster rank list, with 104 mobmasters.