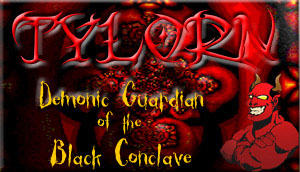 From beneath unkept, sandy-brown hair, a turquoise gaze meets yours. Fierce, bright, assessing, measuring... A sense of forboding sweeps over you. These are the eyes of a fanatic, one utterly dedicated to the Arch-Lich and His principles. The fellow raises his right fist in a salute of sorts, and upon his forearm you see the symbol of Lord Nash burned and inked into his flesh, and freshly stained with blood. Again, a shiver sweeps over you, and you hope he has no desire for your life or your goods.
"Hope?" he snickers. "I am the destroyer. Hope is empty."
His stature, armor and weaponry bespeak a warrior of experience, one more than capable of taking what he wants... at the cost of your life if necessary...

September 29, 1999: Tylorn completes his 57th and 58th mob masteries.
October 30, 1999: Tylorn reaches effective 40th level.
November 1, 1999: Tylorn is accepted into the High Council of the Black Conclave.
December 5, 1999: Tylorn becomes the first person known (and witnessed) to slay the Dream Weaver of Tier Sh'Halen.
January 13, 2000: 13/00 - Cordir sets Ptarchyzk and Palmer to a contest to see which is the 'cooler' thief. Neither fulfills all aspects of the quest. Craving one of the quest items - a chocolate eclair - she lays a challenge to the whole mud: The first to gain her a chocolate eclair within 2 minuets to gain a special mention on the Time Line. Within 15 seconds, Tylorn had one in his inventory, but couldn't get it to her. Palmer slid in under the wire with 3 seconds to spare, and gained her the pastry she was seeking. = )
February 1, 2000: A new Inner Council of the Black Conclave of Nashite is announced and takes control. They include Salem the Black Dragon, High Wizard of the Black Conclave, Stouthbound, Minion of the Arch-Lich, Tylorn, Demonic Guardian of the Black Conclave, Chronic, Pale Cambion of the Black Conclave and Daelin, Grand Knight of the Black Conclave.
February 8, 2000: Tylorn is the topic of a poem by Silonch, called 'Tylorn The Hunter'.
May 9, 2000: Tylorn is Ordained by Molo.
November 1, 2000: Silonch's heart is obtained by the Tigers. Mass chaos ensues and threats are levied against the Tigers should it not be returned to Tylorn. Cordir talks to Silonch about the situation.
March 2, 2001: Tynian posts several notes about behavior, and states in one of them that Tylorn has been deleted, Qithlorien has been stripped of all gear, Malin and all of his mortal characters have been deleted and Asia has been retired .)
March 4, 2001: Tynian undeletes Tylorn.
July, 2001: Tylorn takes part in the "Slayer Quest." One of the 'Slayer' blades is created specifically to kill HIM.
February 2002: Cordir has been making 'calling cards' for folks to display on their websites and on her site, and Keat commissions cards for Tylorn and Maldobar and Bubba, and Dart orders one as well. (Displayed above)
October 15, 2002: Tylorn is reactivated as Ordained of the Black Conclave.
August 18, 2001: Per Nayr's note: " Tylorn was the first to find the watery entrance to the Triton Halls, after 1 hour and 55 minutes of extensive searching by the populace. He joins the ranks of the TFC's Explorer's Society with honor. Check out the Halls if you can, as they are the first completely new area on TFC in quite some time. Be warned, however, that the tritons are not for the small or the weak. :)" Triton Halls was written by Mael.
September, 2002: Tylorn is #10 on XP Ranks and #9 on Mob Mastery Ranks.
March 3, 2002: Tylorn is named in Xavier's retirement note.