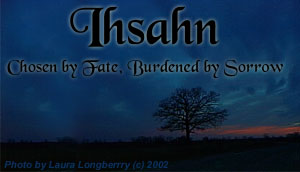 My earliest memories are of my stepmother, Shalia.

I never knew my birthmother, but after she had found me abandoned in the Deepwood one day, Shalia took me in and raised me as her own. I in turn treated her like she was my true mother. She was Elven, like myself, and lived with a Human man on the outskirts of the Half-Elf Camp, the only place they could live together without fear of persecution. My stepmother often told me the story of how they had met, how he had saved her life from a lone ogre who attacked her party of travellers on the Great Western Road. As they travelled together towards their respective cities, he had asked her to become his wife. She had a liking of him, but as she often told me later, she was honor-bound to repay him. Thus, they wed and settled in the Half-Elf Camp.

I also recall my stepmother often speaking of how different he was in those days, how he seemed like a kind, caring person. To me, this was something hard to imagine. All I ever saw in him was the drunken, sullen, mean-hearted man that he had become. I remember him drinking increasingly more as I grew up, losing his job at the mill for it, and beating and forcing himself upon my mother in his drunken stupors. Having been cast out and disowned by her family as a result of marrying a human, my stepmother had nowhere to go, and no way to support herself. Hence, she stayed, and endured the abuse which occurred more and more often.

One night, after a long day of sitting in his chair drinking whatever had been cheapest at the market, he decided it was yet again time to amuse himself with my stepmother. As she always did when she saw these things coming, she immediately ordered me to my room. I believe I was 7 or 8 years old at this point, and still obeyed her blindly. She had always said I must never try to interfere when this happened, as he was capable of almost anything in that condition. This day however, the night did not end with only cuts and bruises... I watched in secret from the crack in my door, as I often did when tears did not overcome me. As usual, my stepmother was attempting to be as docile as possible, to avoid unnecessary violence. Perhaps she squirmed just a bit too much, or maybe it was something about the look in her eyes, but the man who called himself my stepfather didn't like it. He started beating her savagely, worse than I had ever seen him do before. My stepmother tried to fight him off then, in fear of her life, a fear which would shortly prove well founded. I watched him clench both of his large hands around my stepmother's delicate neck.

I was paralyzed. Inside me was a torrent of feelings, and thoughts, the most predominant urging me to do something, but there was something holding me back, stopping me from taking action. So I watched the life drain out of my stepmothers beautiful eyes, and that man finishing his vile business with her body. He stood up, seemingly unaware of what had just occurred, stumbled over to a nearby chair and promptly collapsed into sleep. I don't know how long I remained there, but felt like days.

I vaguely remember crawling out to the body of my stepmother, and lying there, weeping and clutching her, feeling her grow cold. I don't know what overcame me in that moment; it felt like something entered me and took control of my body.

Suddenly I stopped crying and shaking, stood up, and walked over to where that man was lying, sleeping loudly. It was like a dream, I was seeing myself from above, watching but not feeling my own hands grasping at his neck. Some shred of logic somewhere must have realized my hands were too small and the neck too large and strong, so instead I watched myself shuffle about and bring my knee down on the throat, slowly increasing pressure until I was resting my whole weight on it, and then pulling whatever I could get a hold on to add as much force as possible.

Suddenly I was back in my own body, and in that instance there was a sickening crack and the larynx under my knee gave way. Looking at the blue face under me I realized I must have been there longer than I had realized, looking up I was shocked to see that the sun's first rays were gleaming off the houses. Looking around and taking in what I saw I expected to again be overcome with feelings, and break down and cry. Surprisingly, I felt nothing. No anger, sorrow, fear, or regret. It was only much later that I could begin to deal with these emotions.

Realizing that I could not stay in the Camp after this, I packed the few belongings I had and set out before the majority of the inhabitants awakened. My choices of where to go were limited. Non-existent in fact. The only place I stood any chance of surviving was in an Elven city. So I made my way towards Loth Llorien, only a few hours travel from the Half-Elf Camp. As I walked through the Great Hollow Tree and entered the city the Defenders eyed me quickly, and seeing my elven features let me pass.

In the following weeks I lived like an urchin, stealing scraps of food and whatever valuables I could get my hands on. One day I wandered into the local magic shop, only to find it abandoned. I started searching around for anything worth taking when the shopkeeper appeared out of nowhere, with a very stern look on his face. I bowed my head to await my punishment, but the old Elf took pity on me, and struck a deal with me. He managed to convince his colleague, the Guildmaster of the Mage's Guild, to take me on as one of his apprentices. In this way, I learned the mystic arts, and gained citizenship of Loth Llorien.

During my time here I spent much time scouring libraries and the local Inn for information of my past. I found nothing helpful, except for a very old drunken Ranger who frequented the Inn. The strange scars around my ears reminded him of some fleeting conversation he had once overheard, but he could recall nothing specific. Not long after I had completed my apprenticeship, I began to feel the wanderlust characteristic of my race, and decided to seek out adventure. On one warm summer evening I set out from the Great Tree, and since that day I have been acquiring knowledge and experience.

look webs:
If you took the intricate beauty of a just-spun web, illuminated by the
dawn and touched with crystalline dew, then curved it into a circle, an
arcane magic holding it in perfect stasis... you would have this ring.
Surely this artifact could only have been made by the will of a Goddess,
for one who has earned her respect and trust.

01/21/2004: Cordir asks Ihsahn to help out Deyanira: You [GS] tell Ihsahn, 'she needs more experience. First time mudder, first character. Not real good at judging her own abilities or 'safety zone'. Any guard duty or recommendations or anything you can provide - deeply appreciated.'.
03/08/2004: Ihsahn performs a CR for Quick.