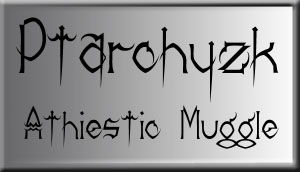 Ptarchyzk sticks his finger in (EVERYONE!!)'s belly button and wriggles it around a bit.
(This habit was later used for inspiration for the restring of a simple ring.)

Ptarchyzk was also known for his colorful gossiped triggers in response to levels:

Your gaze slides past the tall, slender figure, as unremarkable as any of the hundreds that travel through the city. Something about it, though, pulls your eyes back for a second look. But he's gone. Scanning the area, you spot him again, some distance away. Again, your gaze slides over him, as if he simply wasn't important enough or different enough to notice... that in itself makes you force yourself to look deeper.


From his height, your first thought is 'Elven'... but the breadth of his shoulders swiftly paints a truer picture. Brown hair is cropped short, but a forelock falls boyishly over his piercing blue eyes. However, the assessing, sarcastic, almost arrogant gaze that meets yours is certainly not that of a foppish or callow youth, but rather one who has survived alone for decades and has little to no patience for the foolishness, ineptitude or dogma of others. Worn leathers fit snugly over a body that is wiry but capable, accenting the smoothness of his movement as he glides towards you. His weapons are quiet at his side, but his hands don't stray far from their grip. A slight smirk creeps over his lips as he meets your eyes, and nods. Then he is gone, sliding away to hide in plain sight once more.


Upon examination, you realize that this specimen of humanity called
Ptarchyzk is in perfect health.

(Date unknown, log by Cordir)
Ptarchyzk gossips (in common), 'ya know it's getting bad when I post on an alignment issue.. Bah'.

Ptarchyzk cants, 'oooo.. the novelist thought it was good@!'.

You cant, 'Don't make me turn this car around.'.

Ptarchyzk Top Dog Muggle.
Bidding closes Dec 31, midnight game time.
---------
Cordir has the highest bid so far, with Bliss and Grimace in a close second.
Wylin deserves an honorable mention, because I know how much Beer means to him.
I just don't value it as much. :>

Though, I'm amused by the pseudo-insightful responses to
my thoughts on the matter. Yay for mindless masses of mediocrity!

Wed Dec 24 09:51:58 2003
To: all
Kayura,
Not going to say anything mean...
It is my understanding that Ptar is an old player. 2x if I'm correct.
Back in those times. I can remember a many ppl being recruited
by the gods. Not merely asking the god to allow them to follow.
So. Ptar is just letting the gods know where his loyalty lies...money.

Wed Dec 24 11:44:12 2003
To: all
I look at it this way...
I can do whatever I want. It's not hurting you so why should you care?
I knew every single FLI on this game as a mortal. Including Molo, who is the longest lasting.
I am not slighting your beliefs in any way. Tender Sensibilities? Deal with it.
Arrogant? You bet I am. Have issues with this? Talk to every level 50 out there.
I bet you'll find they are just as arrogant as I am... if not more.

02/28/2008 : Corri says (in common), 'this mud also taught me how to spell ptarchyzk. Only very slightly less useful than how to spell hierophant'.

Ptarchyzk was married to Emaleth. They hosted several GTs in their home in Arizona, before moving to Oregon.