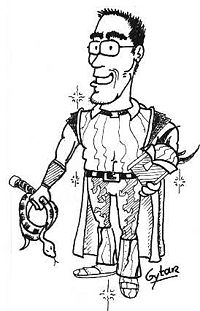 From the 2x Rogue's Gallery:
NOW: 10/28/01 - Dwa [ Doctor ] Gytar D'Alchemist of Unity -LLU- -DOP-
THEN: Dwa [Wa:30 Cl:30 ] Dwarven One, the first dwarf of Ivory
For a long time, Gytar served Kalten as "D1". After Kalten's retirement, he joined Lorna's tigers for a time. When Robert immorted, Lorna released Gytar to be in Unity's service - a rare event as she did not release many Tigers. For the last year and a half, Gytar as served as an Ordained in Robert's service. For a long time, he was titled D1 - Medic, but has worked his way up to being a full "Doctor".

Dear all,
After 9 years of play, I feel it's time to retire. Thanks you all for playing
with me or against me. I would like to thank some people in particular:
Lady Ginny, Lords Coleman, Kalten, Robert and Tiax
Lords Tynian and Madman
Lins and all of his emotion
Whoz and all his characters
Riella, Lanfear, Aiken, Saruman, Noctus, Wolfgang and all other Dutchies around.
The followers in Mirth, Ivory Rose, Unity and Sun
Belgarion for our Velalisier adventurers
And all the others that made this Realm possible.
Signed:
Gytar, D'Alchemist of Unity
Sharn, Stargazer of -Fate-
Tenuviel, Coven fresh!
Alsor Power
Ernoy Me
Total, the BBQing lil Ogur of Sun
Gedix, Sergeant of the Sun Defenders
JustMe, Venturon, Tourion, Amras 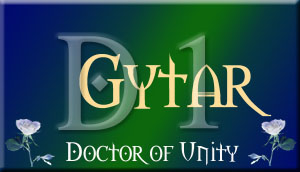 (As provided to the "Faces Behind The Names" page of Cordir's website, around 2000)
Gytar started playing in 1995 at the University of Utrecht (Holland) during his studies Chemistry. Initially introduced by Starlord to TFC, he soon played along with the enthousiastic people of the Dutch clan: Robert, Kalten, Faith, Saruman, Twinklefire and many others. Gytar was accepted in the following of Kalten, and knighted as the D1 of the Ivory Rose. Years later, when Kalten retired, he joined Robert after a short period in the the Flying Tigerss clan of Lorna.