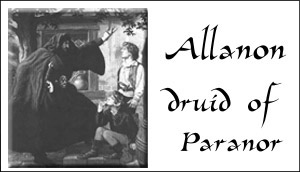 ...They hesitated a moment, then passed silently down the hall and stepped into the front room.
.....It was empty.
....."Well, no Mord Wraiths here," Jair announced at once. "Nothing here except..."
.....He never finished. A huge shadow stepped into the light from the darkened drawing room beyond. It was a man over seven feet tall, cloaked all in black. A loose cowl was pulled back to reveal a lean, craggy face that was weathered and hard. Black beard and hair swept down from his face and head, coarse and shot through with streaks of grey. But it was the eyes that drew them, deep-set and penetrating from within the shadow of his great brow, seeming to see everything, even that which was hidden.
.....Rone Leah brought up the broadsword hurriedly, and the stranger's hand lifted from out of the robes.
....."You won't need that."
.....The highlander hesitated, stared momentarily into the other's dark eyes, then dropped the sword blade downward again. Brin and Jair stood frozen in place, unable to turn and run or to speak.
....."There is nothing to be frightened of," the stranger's deep voice rumbled.
.....None of the three felt particularly reassured by that, yet all relaxed slightly when the dark figure made no further move to approach. Brin glanced hurriedly at her brother and found Jair watching the stranger intently, as if puzzling something through. The stranger looked at the boy, then at Rone, then at her.
....."Does not one of you know me?" he murmured softly.
.....There was a momentary silence, and then suddenly Jair nodded.
....."Allanon!" he exclaimed, excitement reflected in his face. "You're Allanon!"
Allanon is bleeding freely.
Allanon is using:
{Classified}

Allanon worked at the same company as Elfis and introduced him to mudding. Elfis then showed a TFC to a friend, Faille, and eventually his daughter, Katrana. Faile showed it to her husband, and her son Gann.