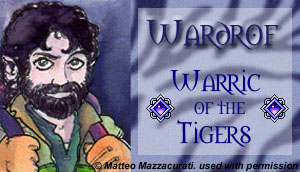 09/25/2004:
You see nothing special about Wardrof, but his Mother always told him that he was VERY special.

Wardrof was born in Hovelton, Son of the Halfling beauty and the Sheriff. As a child, Wardrof showed a unique power, the ability to heal. Unfortunately, with this ability, he was not as sneaky and thief like as the other Hobbits he grew up with. The other hobbit children rejected him, and made him so angry that he left Hovelton in search of another one that possessed the same powers. He found a magical portal that brought him into a place with many other people just like him. This place was filled with clerics, but also mages, shamans, and warriors. After not too long he was told that this wonderful place was called the Guild. People could only visit it if they wielded powers such as his. He felt more at home here; he could talk to the patrons openly about his difficulties. Over time, he found that some people were nicer than others, and that some were not meant to be messed with. This is when he discovered that he was more comfortable around people with a blue glow, rather than with a red glow.

It was then when he met his mentor, Dundrave. Dundrave was a cleric, like himself, from Midgaard. Dundrave taught him most of what he knows about himself, his powers, and how he can use them to promote the better good in the realm. During the time when Dundrave was by his side, he explored most of the Northern Continent, and was able to find the major cities with ease. Finally, Dundrave felt that it was the correct time to bring Wardrof to his god, Tripper. He explained that the tigers are a group of people that use their powers to help the young grow, help the good thrive, and show the evil that good is the correct path.

Wardrof took on a quest to become a Tiger, and in a very short time, completed the quest and was allowed to join the ranks of the Tigers. The Tigers allowed Wardrof to grow and become capable of being independent in the realm. However, he was not ready for the reality of the realm. Evils do exist. He was slaughtered three times in a row, each time losing his equipment, but gaining knowledge as to who is nice, and who is evil. After the third death he gained the most important knowledge of all, others have the same powers as he does. He is not the best fighter out there; he needs to respect the evils, for they are strong.

After acquiring this knowledge, Wardrof was able to grow very quickly, without any other conflicts. He was reminded that evils exist many times, but never again died by their swords. Wardrof gained a belief that no soul should need to die. However, some people push the line too far. For these people, Wardrof has no mercy. He does not make it a top priority to hunt them down, but he makes sure that his friends are kept up to date on their status, so that they can either take down the oppressor together, or Wardrof can take him out alone.

However, this lifestyle could not be lived for long. His god, Tripper, decided not to show himself for quite some time, Wardrof left the Tigers, but didn't forget their teachings. He joined another following that has the same basic ideas as he does: Don't show aggression unless aggression is shown to you and that it is much better to help someone in need than to feed off the weak.

Wardrof was a younger player, and was still in school when he was participating in 200-2003.