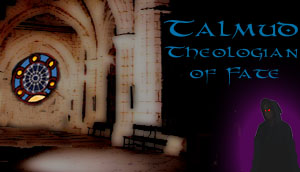 February 3, 2001 - March 29, 2002:
A dim light flickers, each moment threatening to extinguish the
tiny glow into the inky darkness around it. But it chooses to live.
It casts dancing shadows on a figure already obscured from head to toe
in a shimmering gray cloak of splendid weave, motionless, not betraying
any life it might contain. But then the figure raises his right arm by
way of greeting, revealing pale skin, its entire length crawling with
a web-like design, writhing and convulsing in such a way to seem to give
it a life of its own.
And before another thought or word is formed within the recesses of a brain,
the figure is gone, with only a whisper hanging in the air... "May the Triat
guard your steps, and the Lady light the way."
Talmud is using:
<used as light> (Magical) (Glowing) the light of a lost soul
<worn on body> (Flowing) a Theologian's Robe
<worn with pride> (Purple Aura) (Tattooed) (Writhing) The Covenant of the Chosen
<worn with pride> the Brooch of Loth-Llorien

Talmud bows deeply. Talmud says (in elven), 'As per the entrance requirements, Lady Cordir, I have the honor of humbly presenting to you, my history'.

Talmud bows deeply. Talmud says (in elven), 'I will start with my parentage. I am the love child of two servants of Queen Mariel, may her reign prosper, of Cillidellia'.

Talmud says (in elven), 'Queen Mariel in her wisdom knew of the affair, and sensing trouble in the future, forbade it. But love, she also secretly knew, could not be held, and indeed, it was not'.

Talmud creases his brow. Talmud says (in elven), 'And I was born into this realm. Of my namesake...'.His voice trails off as he shrugs.

Talmud says (in elven), 'I was raised until my adolescence, about the 12th human year, under the tutelage of Queen Mariel's musicians'. Smirking, he continues.

Talmud says (in elven), 'Unfortunately for my teachers, I had no skill in music. But Queen Mariel was determined to hide me, and possibly, avert whatever future she had sensed, and I was kept in the class.'

Talmud takes a deep breath. Talmud says (in elven), 'So my twelfth human year, I stood, gazing into the Cillidellian Forests from the highest balcony, confused, frustrated and lost. I did not know who I was, or I was to become, and I had tired of searching.'

Talmud says (in elven), 'So I jumped from that balcony, thinking my life was mine own to throw. But fate and future would not have it'. Talmud says (in elven), 'I landed in the gardens below, face first. I was told later that there was blood everywhere. The gardeners near by quickly rushed tome, and despite the numerous broken bones and entirely demolished face, I was still breathing'.

Talmud says (in elven), 'Fearing the worst, the gardeners rushed me straight to the chambers of Queen Mariel. Recognizing me, despite the battered and twisted mass of flesh that my face had become, she used her great powers to heal me. My face was wrapped in an elfweave material, and after being administered a narcotic, I fell asleep for three days'.

Talmud says (in elven), 'Upon waking, I quickly removed the bandages and found myself a mirror. I was horrified at the image reflected, and I tried to scream, but found no exit for the voice echoing within my body'.

Talmud says (in elven), 'My vision was blurred, and one-eyed at best, my sense of smell was gone, I could not hear, and my voice was lost'.

Talmud lowers his head. Talmud says (in elven), 'And that was when I felt a presence behind me. Queen Mariel. She had a look of... pity,' he says with anguish, 'as her mouth moved in words unheard. A compassionate hand brushed the flesh on my face, and this chilling pain spread throughout my body'.

Talmud says (in elven), 'Queen Mariel gently lifted me from my fetal position of pain, and pointed to the mirror. I looked and again, screamed. Except this time the carnal cry echoed throughout the chambers. I looked at her in alarm, vision cleared, her sweet smell tickling my nose, and the soft crystal whisper of a fountain filling my ears, for explanation'.

Talmud says (in elven), 'And she said this: "Talmud, your face I cannot give you. Your life I have. Even my magic, and the magic of the Hundred, cannot restore your face. Fate has determined it to be as such. But such magic has been weaved around you that you will be able to live as any other mortal... in fact, your senses are greatly enhanced. But you will never again live amongst your brethren as they do. Your face has been claimed by Fate."'.

Talmud says (in elven), 'She then continued to tell me about the forebodings she had of my birth... nothing catastrophic, mind you,' he says, chuckling amiably, 'but forebodings no less. And again, her words: "Your future lies ahead of you, on a path separated from others, Talmud. I am not one to peer into the Future. But you have been chosen. You are Fate's instrument, and your body, your face, is the music, beautiful music," she added, laughing, "that it will play. But beauty, Talmud, is not always sweet. Already your life is bitter. I can sense that. But the first few hesitant chords have been plucked, an introduction to the symphony that you shall be"'.

Talmud says (in elven), 'Her face as she was speaking to me was happy, but shadowed by concern, by... fear'.

Talmud glances at the sun.

Talmud says (in elven), 'It seems I have taken more time than necessary, so I shall hurry to finish. My apologies.'.

Talmud says (in elven), 'Afterwards, to prevent local blackguards on getting their hands on me, and selling me to a travelling show, a freak show of sorts that gained some popularity during that time, Queen Mariel weaved a cloak of invisibility around me, and entrusted me to the care of her personal bodyguard. The Elite then took me, again unconscious thanks to narcotics, through the Vortex into the northern city of Loth-Llorien.'.

Talmud says (in elven), 'Living in Loth-Llorien at that time was an old elf, an emigrant from Cillidellia. He was instructed by the Elite to take me in, and hide me, as service to the Queen. And that he did, too well. I rarely saw the light of day, or another elf's face for that matter. My time was often spent gazing into a mirror upon my face, hearing the youth play and the sparrows lighting upon the window sills, chirping happily.'.

Talmud says (in elven), 'But all mortals must die, even elves, and my master, did so. Using the threadbare knowledge, the cheap tricks of magic that my master had taught me for amusement, and grabbing a black cowl to hide my face, I made my way into the city, and from there straight to the famed Adventurer's Guild. There, I quickly enrolled in the courses of Magic, and after a prolonged, but successful journey through Lleheibwen, graduated.'.

Talmud says (in elven), 'And I gained some experience, under your guidance, Lady Cordir, as you remember, slowly, very slowly, for Loth-Llorien was not a kind master with its militant Defenders. And only recently, I sought out the Master Jack in his wanderings, and he taught me the rigors of the Warrior. In a way, that was a signal for Fate, it seems, as I soon after met a series of embarrassing deaths, too many to count.'

Talmud lowers his head in shame.

Talmud says (in elven), 'but I learn, and I still do, thanks to the guidance of Lord Thaygar, instructing and showing me glimpses into the history, the present, and the future of the way things Are, to Nyx, mortal shadow with his kind friendship, yourself, Lady Cordir, your patient kindness with me, and a few others met.'.

Talmud says (in elven), 'I have much to learn, I have much to grow... and these, I will forever be doing. I have not forgotten the mark which Fate has laid upon me, and so upon Fate's path, do I hope to tread'.

At this finishing words, Talmud removes the black cowl from about his face. Where his face once was is a blank layer of flesh, almost resembling a dark flesh-colored egg. His white hair grows down in the fashion of the Masters of Magic, and his body is fragile, most likely from the fall.

Talmud wears the black cowl about his face.

On 08/16/2005, the Chosen of Fate were having a meeting, during which each present stated their Geasa and had the opportunity to update or change them. Fury was having some difficulty coming up with a new idea. Log by Cordir

You ftell, 'Fury, I have a Geasa suggestion for you.'.

A single silent tear slips down the Weaver's face as She Witnesses the Names.

Cordir kneels next to the chain, and runs Her fingertips over its length.
Cordir whispers, 'You are each, remembered. Loved. Cherished.'

You ftell, 'Name one now, that you are curious of.'.

You ftell, 'Chosen, who can speak of Talmud?'.

Tranquility says (in common), 'I know precious little of who he was...other than that he was one of the best friends I had in my childhood.'.

You ftell, 'Who recalls the days we restored his eyes?'.
You ftell, 'Or the Quest he undertook to gain some knowledge of the Triat?'.

You ftell, 'Or the day he took on the mantle of Thelogian...'.
You ftell, '(theologian, pardon)'.

Nyx still has some old parchment of his, somewhere...

1) I will no longer auction equipment, but rather, distribute them to the needy, free of charge.
2) All adventurers of levels 1-5, have my unfailing loyalty in their growth and learning.
3) I have pledged a pilgrimage to Queen Mariel every (two rl weeks), as her hand shaped my path to this point, and I feel, into the future... somehow.

August 30, 1999: Talmud's Triat Lore Quest is described to the Chosen via a board note.

October 30, 1999: Cordir holds a Storytelling Contest in the Amphitheater: the contestants are Ananasi and Talmud.

January 10, 2000: The Chosen work together to restore The Theologian's Tears.

April 11, 2000: Talmud departs the Realm, following the Will of the Triat.