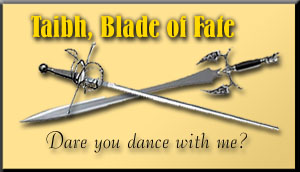 01/11/2002:
Before you stands a tall elf with long brown hair. His striking good looks are complimented by his winning smile as he looks you over. His armor is of the finest material and is in perfect condition. It is carefully color coordinated in browns and greens to better suit an outdoor environment. He sweeps his cloak behind his back revealing a pair of polished weapons at his side. Though clearly meticulous about his appearance, Taibh appears adept at combat.. perhaps not someone you are ready to face?

Taibh is a young elf from the remote forest village of Malenest. From birth he has shown magical talent and was thus brought to the Master Cleric of Malenest by his parents to be apprenticed at the young age of 12. After a short testing, the Master Cleric decided Taibh would be a perfect student, being both gifted and a fast learner. Somewhat unruly, Taibh loved to escape his lessons and explore the forest to the north as far as the remote elven farms and even the gnat-infested plains of grass. He has even been as far south as the outskirts of the human settlement of Harper's Landing. However he knows better than to let himself be seen by their brutal militia..

Now 17 years of age, Taibh continues his lessons with the Master Cleric and also continues to explore around him.. gradually increasing in power and wisdom. He has a love for nature and is interested in the ranger's life, as he perceives it, as well as continuing his Clerical studies.

Taibh likes nature and loves to explore. He also has a love of life and all living creatures, which has led him to the peaceful path of Fate. In fact, about the only thing he hates are Orcs. Orc raiders took his younger brother as a slave when he was too young to do anything about it.. this has led to a deep rooted hatred of the race. In time he will be strong enough to hunt down those who did it and get vengeance. He hopes to become a master cleric , and wishes to learn more about also becoming a ranger. Taibh's striking good looks and natural elven sense of superiority have led him to be quite vain, though he does not think so. His armor almost always is of the finest grade and quality, and he believes looking good to be an important thing..

If he can become one of the Chosen he hopes to find friendship and companionship as he continues to grow. He is also sure he can help other following members with his skills and expertise.