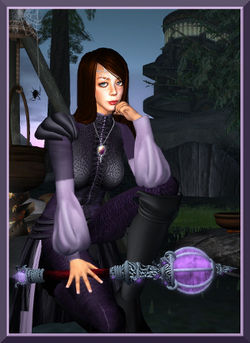 The girl in front of you looks maybe mid-twenties: some curves but not too many, with dark blue eyes and brown hair that's almost auburn. A big scar is on one cheek, where she cut a tattoo away, not too long ago. Her clothes used to be nice, but not any more. She doesn't look like she is all human: maybe some elf or something else in there. Her aura doesn't stay one color: it shifts from cyan to blue to red, and sometimes all three at the same time. Something about her looks familiar, but you just can't place it. She starts to curtsey, but stops, and cusses under her breath and just shakes your hand and says her name. 'Mireya.'

The woman before you seems human enough, but for the fey, slightly odd structure of her delicately boned face. There's an unusual shape to her large, indigo eyes that isn't quite elven, isn't quite Aara, but something vaguely disturbing. Hair the color of fall chesnuts roasting on crimson coals ripples down to her hips, a series of nine-plaited braids binding it out of her face. Garbed in simple armor that is unremarkable other than the care that has been given to it, she wears it with an uncomfortable air that speaks volumes of her dislike for bringing harm. Over the chain mail, she wears simple robes of dark blue, bound by a narrow belt of woven silver, which matches neatly with the silver embroidery upon her robe's hem and collar - a pattern of interwoven webs, thorny briar vines and runes from the language of the demon-princes. When she speaks, her voice is soft but melodious, and touched with a strange and archaic accent. 'I am Mireya. Well met.'

Large, deep indigo eyes filled with curiosity and intelligence meet yours in the face of the lovely young woman before you. She tilts her head to one side in a strangely familiar gesture, and *moves* with a swiftness and grace that is nearly impossible to track with the eye, dipping into a quick curtsey. A mantle of dark brown hair, ornamented here and there with impossibly intricate multi-strand braids, flows down her back reaching her narrow waist. Robes of a deep blue that matches her eyes flow in graceful folds to the ground, but here and there, slits in the soft fabric reveal a hint of well-toned leg. Spider-web patterns in black have been embroidered all over the robes, and by the collar and wrists, the webs glint in silver thread. She has the vitality and strength of youth, appearing to be in her mid-teens, but has a maturity of spirit usually seen in those much older. Her eyes flicker to the sides, as if searching the shadows for someone she both expects, and knows may never be seen again. A soft sigh escapes her full lips, and her head bows for a brief moment. A shimmer appears around her, as if for an instant, the spirit of someone unseen embraced her gently, comfortingly. She straightens, and looks back up at you, her eyes both comforted and yet still a touch lonely. "I'm off, then. Darkness with you and a clear Pattern before you." With one last smile, she departs. 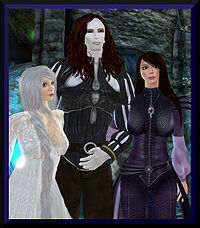 A young woman dressed in motley, but well made garb, smiles back at you. The merriment in her dark blue eyes is contagious. Her extraordinarily dark brown hair almost disappears against the darkness of her robes, which are covered with intricate patterns you can't quite focus on - they seem alternately sharply defined and hopelessly jumbled. "And where in my mother's Pattern do _you_ fit?" she murmurs with an inscrutable half-smile. As your brow furrows at this decidedly odd question, she chuckles. "Or do you bear rather the marks of my father? No, you wouldn't, I suppose." Her ears - somewhat more pointed than a human's, but less so than a full elf's - prick suddenly, and she turns with unnatural speed to face the tall, dark figure who steps out of a nearby shadow and smiles at her. "Speaking of the demon... Nice try, Father," she says, returning the grin, "but that trick hasn't worked since I was four and Mother showed me how to See the patterns you make." Returning her attention to you, she tilts her head to one side - a gesture that suddenly reminds you of someone else, as do her eyes - and grins mischievously. "Off with you, then. Darkness with you and a clear Pattern before you." She murmurs something in Thoras and soft glow surrounds her. With one last smile, she departs.
Mireya has a special twinkle in her eye.

Mireya is the daughter of Cordir and Deamhan - a Triat-Incarna Immortal and a half-elven/half-demon Vampire. With that bloodline, it's not surprising that the girl doesn't seem entirely of this world. Like most young girls, she quarreled with her parents, and has tried to seek her own way. In one streak of rebellion, she has embraced the Nashite faith that excommunicated her mother.