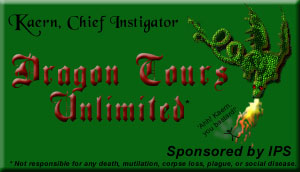 (Upon seeing this card at its original creation date, Khore noted that the flaming figure looked unpleasantly like him.)

Sun Nov 15 13:23:52 1998
To: all
Flying is an exhilarating sport, soaring majestically through the air
an incredible experience...even when it's casted and you're indoors!
The bland message "Kaern now can fly" (eww!) should be changed to
something more interesting like "Kaern bumps his head trying to fly
in here!" or whatever...

You are invited to sign up for our world-renowned Dragon Tours...
---> Some of the newest features we provide:

IN FACT: If you find cheaper rates elsewhere, we will match their price OR
give you a full refund if you discover their price within thirty days of
purchasing our ticket, as long as you have their receipt, our receipt, and
show up at your local DTU coordinator's office between the hours of 4-5am.

Note: For someone as accomplished and omnipresent as Kaern was, he rarely reported news to the time line. Many of his accomplishments can be noted in the Room of Records, however.

February 07, 2000: Kaern is pkd by Redrum and Borneo. This causes quite a stir as it was clear through info that Kaern was linkdead prior to the attack. Even Molo expresses disappointment in the two Conclave killers, but not to the extent that the corpse is ever returned.

December 29, 2001: Kaern is attacked by a Thorny Tendril for no apparent reason.

March 30, 2002: In a underhanded attempt to further Lanfear's ongoing punishment (She is forbidden to leave the guild), Lins and Kaern portal her out of the guild. Kaern later profusely apologizes, while Lins reports Lanfear for leaving the Guild to Cordir, without providing the slight detail that he was the cause and means.

February 09, 2003 - Kaern gossips (in common), '*Discovery channel voice-over* this is the mutant cannibal in his philosophical mood'.

February 20, 2003 - Kaern dies to the balrog, after being lured to a place he can't escape from by Sako. Kaern gossips (in common), 'don't make me assault you with frogs'.

March 15, 2014 - Kaern visits the 20th Anniversary Party. He's given a quick tour of Riverhold, and is heard to say... Kaern gossips (in common), 'I discovered today that I can pass for a root vegetable'.