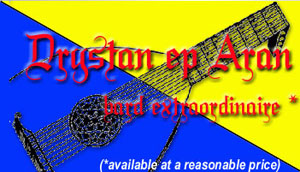 03/12/2002:
In a drastic change from his normal presentation, the aarakocran before you appears quite serene. Gone are his lute, his flashy manner, and his oft-worn jester's cap, and in their place there are only plain white robes and a sense of steely determination. His eyes meet yours ever so briefly, allowing you to see a glint within them that promises not all has changed, then he turns once more to his task at hand.
Drystan is in perfect health.
Drystan is using:
<worn on body> a white robe
<worn with pride> (Purple Aura) (Tattooed) (Writhing) The Covenant of the Chosen

03/15/2002 - Written by Cordir:
The aara who stands before you, lute slung over one shoulder, wears the bright motley tones of a wandering bard and has the long, gangly legs one might expect on a stork. His snowy wings, folded back against his body, have the paleness of pure, sanctified ceremonial robes. Dark eyes gaze back unblinking at you, filled with a mixture of merriment and solemness. He unslings his lute and begins to strum, murmuring softly under his breath as he crafts his performance for the upcoming Bardic Circle. As he sings, the glowing ball that dances above his bared head seems to hum in accompaniment, the once-lost soul given the peace of friendly companionship and purpose.
Drystan is in perfect health.

10/27/2001:
Drystan ruffles his feathers slightly at your attention.
Drystan is in perfect health.