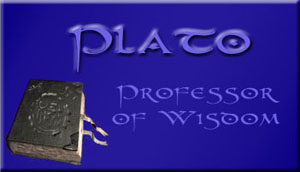 Plato organized the Chicago GT in 2002. He also wrote an area: Lookout Tower.

(Taken from the original TFC Player Pages)
Plato is a tall human man. His face and arms has old scars on them. The scars that only a dragon could leave. You can't help but think, as a boy, he must have walked-up on a sleeping dragon and tried to play with him. He must have been a foolish boy, but lady luck must walk beside him, because he didn't die from his foolish game. His cloths are old and worn. The dirt on them shows that he likes to stay in the wood for weeks on end. His eyes show a great wisdom, as you look at him. He grins at you making you feel safe just being around him.

I reached 30/30 a few weeks ago. I have been searching my soul for what I should do next. I have reached my goal of 30/30 without being pk'ed. So, I need to set a new goal. I thought about seeing how many mob masteries I could get, but I get little enjoyment from mob masteries. I thought about pk'ing, but I have never attacked anyone yet, so why start now. I am going to set a high goal of becoming the best Immortal, I can be. I have the 40 mob masteries. I have read the rules for Immortality, and I see no problem in my ability to follow them. Thank you for your time.
Plato