The following was written for Tiax's Area Story Contest by Cordir.

It all began in N'Kai. Even simply the name conjures up visions of the inky fluid that is the Darkwater, snaking through endless tunnels filled with howling winds, or of shamans bare of all save the tattoos and sigils that mark their devotion. There, the mortal body is overwhelmed as every sense is pummeled. The scent of incense carried upon the breeze, the echoing splash as a monstrously huge eel slides through the water slapping its tail, the coolness of the air cascading down from the hurricane above; all of these are part and parcel of the experience known as N'Kai.

But it is my spirit that drinks the most deeply within those hallowed halls. It was here that I first willingly laid down my life for Lord Thaygar, casting myself with sacred devotion upon the fangs of the Dhole, its acid bite stripping away all thought or sense until I was reborn in mortal flesh. Here, my self, my being, changed from that of a terrified, half-mad, patricidal runaway to the Ebon Bard, blessed by the praise of the First Prophet in his holiest of holies. That day began a Path that would lead to Ascension and Triat renewal, bringing the praise of the Three to the Realm once more… and now to the full Restoration of the Three, with Weaver, Wyrm, and Wyld all given representation. Would that Thaygar had seen this day. Perhaps he did, in the visions spawned by the ebon fires that shrouded his hand and illuminated his temple.

Time and time again, I have returned to N'Kai and ritually bathed in the ice-covered waters of Lake Hali, purifying myself and casting off the burdens upon my heart and soul. To this day, I wander its black shores when troubled, and bring each and every Chosen here on a rite of passage, that they might know its thundering glory. The great Serpent that sleeps below has bathed my faithful in its tears, blessing them, and the shamans have imparted what wisdom they will in binding that which must be bound, in growth for Mastery, and for the sacred bonds of marriage.

It is my heart of hearts, the great Mystery that cannot be fully understood, yet captures us, childlike with wonder, at the hints of things unimaginable. It is home.

Thaygar had plans for a second, adjoining zone to N'Kai, which he shared with me in the form of a story that we co-wrote. It was full of all sort of subterranean horrors, and revealed that what is visible of the Dhole in N'Kai is but one part of the beast...

Notes: Noctus' map appears to have an extra row of rooms on the Floor Level of N'Kai.
Notes: No key found for room 1N of Shore of Lake Hali, cannot Pass Door 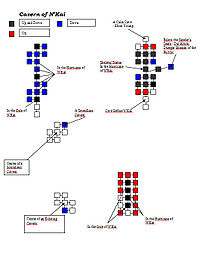 N'Kai the Black: Map by Noctus 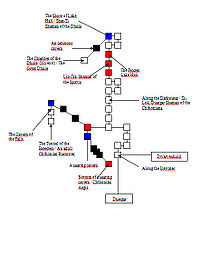 N'Kai - The Darkwater: Map by Noctus
Retrieved from "http://www.tfcmud.com/wiki/index.php?title=The_Caverns_of_N%27Kai&oldid=14176"
Categories: