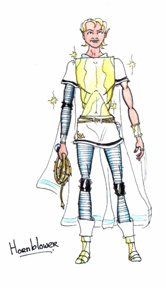 Teina The Fire Lizard: First Hatching
Worn description: (Magical) (Glowing) (Flaming) a golden fire lizard
Long description: A tiny golden creature hovers in the air here, wings beating fiercely.
examine teina:
Crystalline eyes glowing and whirling, her tail wrapped affectionately around her lifemate's neck, Teina nuzzles against his cheek. *Hungry,* she mind-sends. Jumping to your shoulder, her thin nose pokes into your pockets, looking for a tasty morsel or tidbit that you might have the kind heart to provide. Not finding what she seeks, the tiny golden fire-lizard launches from your shoulder to circle the area, always protective and watching for danger.

Teina, Reborn.
<worn on body> (Perched) a golden fire lizard
examine teina
Perched precariously atop her life-mate's shoulder, this intriguing creature digs her claws into the padding that protects him as she leans forward to better examine you. Crystalline eyes glowing and whirling she looks at you with an inquisitive gaze. *Hungry!* she mind-sends, then turns back to nuzzle affectionately against his cheek. He glances over at you questioningly. Jumping to your shoulder, her thin nose pokes and prods your pockets looking for any tasty morsel or tidbit you might have the kind heart to share. Not finding what she seeks, the tiny golden fire-lizard launches from your shoulder to circle the area, always watchful for danger and protective of her bond-mate.