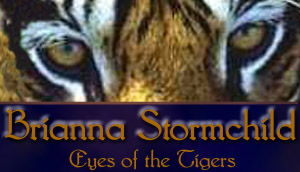 Brianna participated in Lorna's songwriting contest (entry below) and A Storytelling Competition by Tirayel in which she won first prize.

He came from wicked Migaard town
He came to my need and aid
His words were few, but his actions kind
Gifts he gave to this young maid

His cloak he wrapped around my form
As shivering, there I knelt
His gentle hand, though scarred and strong
The most tender thing I'd felt

Food he gave, more to soul than flesh
His kindness healing deep
The wounds of heart, this maid did bear
That oft disturbed my sleep

Off he strode, his task here done
So many worthy souls to aid
He left behind sweet memories
and took the heart o' this maid

The young woman before you smiles shyly and ducks her head slightly as she realizes you are looking at her. She dips a quick curtsey, causing the weight of her silky brown, gently wavy hair to slide over one thin shoulder. Her blue eyes are an unusual hue and are the most noticeable feature of her expressive face, next to the shy sweetness of her smile. Her fingers toy with a long golden brown feather, bearing the distinct, unique banded pattern of an golden eagle. Its end has been sharped for use as a writing quill, and the top of a leather bound journal is just visible peeping out of a large beltpouch. The soft feather seems to be a comfort, as she caresses its downy surface almost like a worrystone.

She lifts her chin, and her eyes meet yours. "There are bad people in the world. You just can't loose track of the fact that there are also those who are, and do, good, too. I have been graced with aid from so many people... and it is a light in the darkness when pain crashes in to shake your foundations.' She lifts her chin resolutely. 'I choose to be a light. Which are you?'

Though she bears no resemblance to the winged insect, the young woman standing before you instantly reminds you of a butterfly. This puzzles you for a moment, until you finally recognize her as the tiny, frail little half-starved waif that was rescued by the Lady Silonch and Lord Abender Stormreaver, and accepted into the Tigers by Lord Tripper. It seems the little caterpillar has finally grown beyond her protective chrysalis.

No longer stooped and shivering with fear, she has bloomed into a strong, graceful, eloquent young woman who meets your gaze with one of quiet determination in her storm-blue eyes. Tucking a stray lock of softly wavy, chestnut brown hair behind one ear, she lifts a hand in blessing and benediction. As her hand lifts, her sleeve slips down her arm, baring her wrist. There, a narrow band circles her lower forearm in a pattern of jagged lines. She blushes, and covers the lightning bolt tattoo, a reminder of a debt of honor and tender first love that blooms determinedly in her heart still.

My earliest memories are of darkness and pain. Of the howl of demons beneath a far-too-thin grating. Of wrestling with dogs for food, and scurrying past Slue’s watchful gaze. Of learning the shadows, to avoid any attention, to sidestep the pitiful glance, as swiftly as the booted foot.

My name is Brianna.

As near as I can tell, I am seventeen winters old. I don’t recall my parents – only a night of chaos and shouting, of blades drenched in blood, of a beautiful, musical voice, and a glowing blue crescent moon. I remember the blow to my head, I remember them throwing my body from the cart, where two others… sisters? Friends? … were still bound. And then… waking in the ally, with a janitor trying to discover if I was trash to be picked up, or a drunk to hand over to the city guards.

I hid, for a while, in the park and the orchard. The soothing sound of the hum of the bees was sweet lullaby to me. But then, one day, they tore it all down, and put in a trout stream – for the Mayor’s afternoon amusement, I heard. The ducks got more of my company, after that.

For a while, life was a blur. Gathering the scraps and morsels left by careless adventurers, creeping into the guilds to listen as they took lessons, trying to make sense of a world that was far too vast for a child as young as I was.

Then, one day, I met Lady Silonch and Lord Abender. That day changed my life. The Lord was striding into the Guildhall, dragging some miscreant by the collar, when he saw me crouched in the shadows of the kitchen, trying to warm myself. He dropped his burden, and knelt beside me. His voice was kind and gentle, and he wrapped me in a cloak to still my shivering. It was the first kindness I had ever been shown. Later that day, a stunningly lovely elven woman came into the chamber, and also clothed me, gathering women’s garments of such a soft and lovely color, I first refused, certain that only a princess could wear such fine things. Growing afraid, unused to such caring, I fled.

Days later, the two found me once more, and again, gave me food, and a kind word, as well as material aid. Silonch offered to sponsor me in the mage’s guild, and I leapt at the chance to follow in her footsteps.

The months passed swiftly after that – one atop the other, like leaves upon the ground. Lord Abender’s visits grew less frequent, and Lady Silonch began to be squired about by a huge, frightening man who seemed more like those trapped beneath the grate than the proper Lord for such a lady as she.

I tried to make my own way, helping a youngling there, or practicing my magic on the wild dogs that plague Midgaard. It was on a trip to the elven city of Loth-Lorien, that I was reunited with lady Silonch, and met the Immortal named Tripper. Both were a kind voice in the darkness, when my world had narrowed down to fear and panic once again. Rowan had asked for my aid in her studies, and we had eagerly hunted deer and foxes in the half-elven camp. As she reached mastery of her eight circle, I brought her back to her home. Little did I know how keen the eagles’ sight was. In a moment’s blink, I was surrounded. I panicked and ran, finding myself deep within the bowels of The Great Tree. I had never been there before, and the eagles pursued with bloodied talons and beaks, eager for my human blood. Were it not for Lord Abender’s gift of a powerful amulet that allowed me to heal ever so quickly, I would surely have been slain.

But then, when I was certain the end had come, instead came two gentle voices. One, a soft and firm tone, telling me to calm, that all would be well. Then, Silonch’s gentle whisper. The hours crept on, as they tried to find me in the tangle of roots, deep in the shadows, all the while, the scream of the hunting eagles in my ears.

Bending darkness to her own whim, the lady mage created a path to me, and helped me reach sanctuary. When finally I stood in the Inn, I was able to meet Lord Tripper – he who had been the calming voice in the dark, amidst my terror. I was terribly shy, and did not dare speak overmuch to him – only to stammer thanks, and stand still as a stone, in terror for having attracted the attention of one of the high ones.

But his smile was gentle, his demeanor like that of a compassionate teacher, and my fear faded somewhat, enough to bob a curtsey, and seek rest. Later, I asked Lord Abender and Lady Silonch of Him, and was told that He was all I had sensed and more…

Log by Cordir, who was terribly amused that one of her mortal characters was being used in an arguement...

Azeworai tells you (in elven), 'bridget i think is the char name comes on and gossips's who has an red aura flag....'.

Azeworai tells you (in elven), 'yea this is good. but she takes it to far in how she is trying to save people'.

You tell Azeworai, 'And what would you suggest she do instead?'.

You tell Azeworai, 'What would better fit your concept of 'good' '.

Azeworai tells you (in elven), 'state once and let it be,, if someone questions what she said ignore them'.

Azeworai tells you (in elven), 'coz all it will bring is another discussion on what good and evil are'.

You tell Azeworai, 'So she should ignore those who make fun of her, including you? That would make her actions more 'good.

Azeworai tells you (in elven), 'yes she should,, by the time i said something the discussion was already in effect'.

Brianna's TS got a lot of attention. Most folks thought it was a bit odd for a level 11 to be running around with an Artifact Magic worn on neck - including a Veldrin named Groul, whom Brianna had never met until that moment..

You say (in common), 'That's a rather personal question.'.
You smile happily.

Groul grins evilly.
Groul says (in common), 'from your husband?'.

Brianna steps away from Groul.

Groul throws back his head and cackles with insane glee!

Groul whines annoyingly. Why don't you slap him?

Brianna steps away from Groul.

Groul says (in common), 'you should set up a trigger for when I enter the room Brianna'.

You say (in common), 'that would imply a willingness to put forth effort on your behalf.'.

Nevi looks at you.

Nevi utters the words, 'cloak of protection'
. You are surrounded by a magical cloak.

You say (in common), 'she gave me the ally discount'.

Sethvir says (in common), 'smart for being so small'.

l pendant
The pendant dangling from the choker would just rest in the
pool of the throat of the woman wearing it. As you examine
the mithril disk, you hear a almost inaudible rumble, as if
thunder pealed in the distance. The silvery circle warms in
your hand, and the design upon it - a raised bolt of bluish
lightning - seems to flash.
l bolt
As the bolt of lightning flashes upon the mithril pendant,
a man's deep, husky baritone voice can be heard:
"For you, little kitten, who shares with me the stormgift."

Brianna was a mortal alt of User:Cordir.