The Destruction of Tier Sh'Halen

It was the month of the Testing by the Fates... and trouble was coming.

John once more studied the heavens, reading the signs visible there. The clouds shaped like a serpent that arced and writhed across the sky... the lack of birds, save for the black carrion crows... and that odd, greenish cast on the underbelly of the clouds that piled up so menacingly to the east. All were portents that could be read by any child of the island. Ill was coming.

As the Voice of Vengeance for the people of Tier, it was his task to stand not only as judge, but also as punisher for misdeeds. The voices within him that guided him in his judicial duties were silent; the cause of this malignancy was beyond his vision to see. Perhaps it was a punishment from the gods themselves. The Three knew there had been troubles aplenty with the newest of the Elders.

Mordath was a castaway, flung up upon the pale sandy shores of the island when his ship had been torn apart by the chaotic winds of the Tempest. If the truth were told, John did not like or trust the man. It had nothing to do with Mordath's preferences in the bedroom, though they were unusual; John didn't care what the man did, so long as everyone was consenting. But there was something about the way Mordath prayed, and let his wealth buy the support and agreement of others that made the Voice's hackles rise.

John continued his walk along the beaches, muttering as he nearly twisted his ankle on one of the more treacherous stretches of the north-western beach. The shoreline was jagged, the stones pounded since the world was born by the icy currents that flowed from beneath the Gla-Shorn glacier. It was here that Mordath had been found, stripped of all belongings save for the clothes upon his back and a pouch of jewels and gold on his belt. Nalatha had found him on one of her morning treks around the island's perimeter, and half dragged, half carried him to the Holy House.

As he stood upon the spot, a deep sense of foreboding overcame him, and he shuddered involuntarily, wracked to his core. Casting another glance upward at the sky, he wrapped his thick woolen cloak about him tightly and hurried back to the house of worship.

Hragge smiled at the Voice as John hurried by, but the powerfully built, god-touched warrior did not pause. Murmuring a plea to the Starry-Eyed for John's peace of mind, Hragge returned to his careful calligraphy. As the librarian and chronicler, it was his duty and pleasure to preserve the history of Tier and provide educational material for the village. Besides… a witch from the distant lands to the north had fortold his future in her tarot cards: He would live beyond the ending of his home. He could think of no other place than Tier he could call home. Thus… whatever was coming, he would survive. What, then, could he worry about?

Mordath smiled up at the purplish-green clouds that swirled in such horrifically unique shapes above the island. He was tired of this silly little place, and more than once, it had been the target of a vitriolic curse muttered under his breath. He recognized the strange, energy-filled stillness for what it was, and chuckled darkly. There would be no escape, so why not make his last hours pleasurable? After all, there were the delights of young Kira to attend to…

Darl'Shinai gestured for another drink, waiting for the storm to strike. He, like Mordath, recognized the coming storm for what it was, but unlike Hragge, was truly immortal. It did not matter how many times he was struck down, he would rise again… The span between rebirth was simply a momentary inconvenience.

Jennie, Bethie, Davy and Stevie hurried for the schoolyard. There was an examination today, to see if they'd been playing or paying attention. Under his breath, Stevie muttered a plea to the gods that something, anything, delay the test…

It was the month of the Testing by the Fates... and the death of Tier Sh'Halen arrived in the form of a howling, screaming wind that tore apart the sky itself, writhed down in a cyclonic twisting mass that ripped up the land. Just beneath the city, the earth shifted, its foundations having been eaten away by sea and serpent. The ground moaned, the buildings shifted, then slid into the open maw that opened up beneath them…

Of those mortal, only Hragge survived to carve a tombstone warning adventurers away from the horrible destruction that is all that remains of Tier's glory… 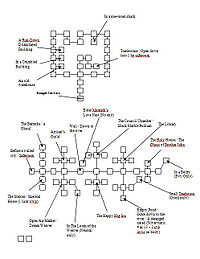