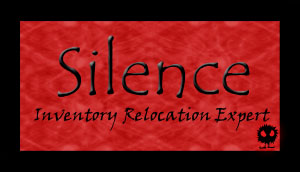 01/08/2002:
Silence gossips (in common), '(out of char) i roleplay my char, he is mute. *in sign* luckily all of you understand sign :)'.
Saruman gossips (in common), 'But.. how can blinded people 'hear' you then?'.
Cordir ftells, 'Silence is the most talkative mute on the planet'.
Dalaran auctions (in elven), 'i would love to bid on Silences stuff, but unfortunately i cant understand sign :('.

A half-elven family, traveled north late one night on the great western road. Who where they? Why were they traveling? No one knows. The bodies were found, slaughtered, and all were dead save a small child who had somehow survived having his neck slashed and was left for dead.

The child was taken to the greatest healers in the land and made well, though the injury so severe a wicked scar was left upon his neck. But his name, his family, his history remained a mystery. None knew him. None knew the family. Those caring for him quickly learned that his injuries were not fully healed, could not be fully healed, though the baby opened its mouth to scream and cry, no sounds came out.

As an orphan growing up in the half elven shanty town, the boy, nick named Silence, found it hard to fit in. He couldn't speak which made it hard to play. He was small and unassuming, which made him hard to notice. In fact, he started to understand that between his gruesome neck, his sad story, his lack of voice and his boring looks, people seemed to not want to see him. The matron at the orphanage game him books that showed how to make signs with his hands, so that he could speak, but almost no one else knew the language. He could write, but few wanted to spend time reading his notes.

He was not trained as one might thing a boy should be trained. He learned mostly by watching. He was the boys training to be warriors fight and he copied what they did to train. He watched the rangers as they faded into the trees and learned to step carefully and hide. He tried to learn to cast but without voice he could not. Most importantly though, he watched the beggars steal.

After that the story was uninteresting and has been told a thousand times. Young boy becomes a thief. Young boy gains infamy for his nimble fingers. Young boy steals without any consideration of who from.

Then he stole from the Dark. The god Kerriariadne took offense to this small half elves gall to steal from his flock, blessed one of his followers and bade them hunt and kill the child. On the same Western highway that his family met their end on, three members of the dark found the young thief hunting purses and jumped him. Cursed, blinded and heavily wounded, the child manage to flee the markets, flee onto the highway, flee back to his shanty town and flee into the safe resting places found within the town. The entire time being pursued, summoned and attacked.

The god Kerriariadne, seeing this all, impressed at the child's tenacity, ability to survive, called off the Dark and bid his healers to heal the child. He told the child he was impressed and that if he could ever learn to speak and cast a spell, Silence could find a home within the Dark.

Silence explained to the god that this was impossible, that without speech he could not learn the ways of magic, but the god held firm. Silence set upon a quest that day and eventually, stormed into the gods temple and before the god and his flock, unscrolled a magic scroll and with force of will made the spell leap from the page.

There, Silence told the god in his language of signing, I have cast magic before you, I wish to follow you.

Kerriariadne, a god who was ever impressed by ingenuity, agreed that the thief and done as asked. He allowed the thief to worship and as a gift, crafted an amulet that when worn would allow for any who saw the thief's language of signs, to understand it.

2002:
01/08/2002: Silence gossips (in common), 'its silence's random junk sale, with mad mad mad prices, i must be mad to sell things at these prices'. ### [Somewhere, Silence pantamimes dieing a tragic death to lack of food]
02/26/2002: Silence gossips (in common), '*in sign* mute half-elf power'. Tranquility ftells, 'Got this on info: [Somewhere, Silence signs - i think you should have godly sandals]'.
02/27/02: Silence is slain, without provocation, by Sian of the Dreamers.
04/16/02: [ 23] Silence: Thieves Guild / Tue Apr 16 14:57:12 2002 / To: all / I plan on starting an alliance of thieves. It will be open to any person regardless of age, race, or religion. the only requirements is that the person is at least level 8 and is a level 6 thief. anyone that applies and follows the rules will be accepted. The reason to join the thieves guild is that members do not steal from each other. they may attack and kill each other, but they do not steal. they might steal from others in your religion but not you. the guild will be a very simple web page listing the names of its members and maybe thief tips in the future if you wish to join send an email to donjuandemiko@yahoo.com Title is "Thieves guild" and include your character name and levels for example "JohnQpublic 30 thief 20 fighter 10 mage" Thank you for your time. Silence, the Inventory Relocation Expert of Dark. Silence gossips (in common), '*in sign* im all pink . . . i feel so . . . feminine'.
07/23/2002: Silence cants, 'is it up yet'. Silence cants, '*and no comments about things i hear from my girlfriend*'.

03/27/2003: [ 18] Silence: online locater service by myself / Wed Mar 26 22:34:42 2003 / To: all / After much consideration i am offering my services as a profesional teller of those online for a small feel I will be more than happy to tell you if the person you seek is online or not by using my patented "who" 5000 technology I will be able to locate your intended playere with a 98% acuracy and let you know if they are online just give me a tell and 1k and the information is yours. / Silence, Inventory Relocation Expert of Dark and offical Who 5000 technology user
03/28/2003: Silence shares with the world (via note) that he died due to plague, recounting his final moment.
03/29/2003: Silence reposts his Thief Guild note.
04/29/2003: Silence is PK'd by Thrall of the Rose. To raise money to buy back his gear, Silence auctions (in common), '*in sign* selling immunity from my talents, give me a tell'.
05/10/2003: In response to a story Oook was telling on gossip: Silence gossips (in common), '*in sign* this better end with some sort of sexual double entant or im gonna be disapointed'. // (After kissing all the women in the room) Silence signs - my lips are some of the greatest tips a woman can recieve, all that talking of your tires them out, mine are always at full strength. // Silence is attacked by Valgar and Loto, with Valgar getting in the killing blow. // ### [Somewhere, Silence makes the international sign for -give me my money-]
05/11/2003: Silence reaches level 30.
05/15/2003: Silence is Ordained by Kerriariadne as the "Dark Bandit." Shortly thereafter, he is PK'd by Solaron. The reason given was "a Darkling killed my friend Grale." As a result, Bliss Hexes all of the Wyld Hunt, and all of those who name Hunt as their friend.
05/26/2003: Silence gossips (in common), '*in sign* im not evil im mis understood :)'. At Cordir's request, Silence comes to help out a lost newbie.

2004:
09/08/2004: Silence bad recalls to Demon Realm and dies to a Fire Demon. Then again to a Shadow Demon. Then to Orpik.
09/15/2004: Silence gossips (in common), '*in sign* im lookign forward to the midgaurd chocalate revolt'. Silence gossips (in common), '*in sign* in a stunning political move 'Schwartz said (in common), 'C is for Cookie, that's good enough for me. Schwartz gossips (in common), 'I'm working my constituents'.
10/11/2004: Silence posted a note about helping newbies, and expressing his disgust about those who would loot a newbie corpse. This sparks a series of smack-talk notes, led by Solaron, who feels that "After all, if we sat down and separated newbies from non-newbies based on skill, you'd still be a newbie." Notes are posted by Jaerith, Judge, Anandunaiss, Wunk, Solaron, and Dart.

2005:
October 10, 2005: Silence announces via board note to followers of Kerriariadne that he 'has a monkey' and is back.
October 30, 2004: Silence posts his retirement note.
[ 18] Silence: I think I have to admit to myself that my mudding days are over
Sun Oct 30 20:12:10 2005
To followers of: Kerriariadne
i've loved being in dark
In my 11 years of playing this game
Silence has been my favirote character
and I mean this in no way as a simple pleasentry but Dark has been my favirote following so far
and I think in total, combining all my characters, i must have followed at least 20 gods by now
and Silence has been in dark since like level 20, so in a lot of ways in my mind without dark silence wouldn't have been as much fun
If the mud picks up again I might come back
but right now it is just no fun wandering around with no one to steal from
so I plan to check in every now and then, but mostly I'm retired
Silence
-Inventory Relocation Expert of Dark
-All your bags are belong to Dark