Dauskdraugs are long, serpentine creatures made up of segmented bands of muscle, with three sets of powerful, clawed forelegs and fanged maws. Familial groups are known as a 'coil,' each of which is led by a Queen.

Dauskdraugs, like ants, specialize from birth. Various specializations include caretakers, brood-females, brood-males, consorts and guardians. These variants can generally be differentiated by circumference and length, number of eyes, and the presence of the neck-ruff, a series of stone-like projections that are used as both defense and offensive weapon in battles for dominance within the coil. Rumors of Queens in excess of a hundred meters in length have been rumored but not substantiated. Some within the scientific community believe that such myths are based upon the Dhole, rather than a dauskdraug.

The dauskdraugs live in cavernous complexes and twisting tunnels, bored out from the earth through the use of their powerful jaws and acidic spittle. While this saliva is powerful enough to weaken the rock, it is believed that only a Queen can generate enough to utilize it as weaponry, due to the spikes in hormone production during gestation. This, however, has not been proven.

In 2518 YH, a hibernating male dauskdraug was found during mining exploration near Gla-Shorn. This creature's age was estimated at four hundred and twenty, based on the number of bands on its body. Each band is believed to represent an annual molting cycle. Upon being awakened, the dauskdraug promptly ate all of the miners save one and slithered off into the mines. While several expeditions to locate and study the creature in its natural habitat have been funded by various scholarly groups, none have returned successfully with data. 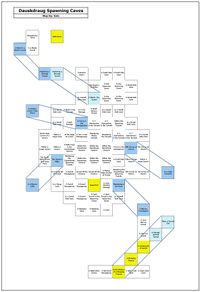