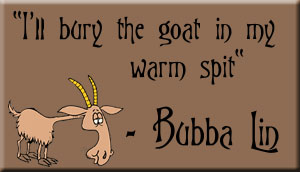 Bubba's language on gossip was repeatedly "colorful," gaining him multiple silences and trips to the cooler.

Bubba has a special twinkle in its eye.
Bubba is in perfect health.