This Area Lore, written by Solaron, was submitted as part of Tiax's Area Story Contest and took third place.

Tharune - a prelude to an upcoming area

The whip snapped again, tracing long, thin lines of blood across his back. The pain was nothing - would always be nothing. He forced down the urge to retch as another wound was laid anew, atop the criss-crossing pattern of previous lashings.

The pain is nothing.

He chanted this himself. It was his ward against the pain, against the blackness that constantly tempted to overwhelm him. It was always there, watching and waiting for the slightest weakness. He resisted it, denied it. So many of his people had succumbed. They had lost their will to fight, and had instead been slain like cattle.

Those thoughts brought rage. Rage seemed to hold the pain, the seductive call of unconsciousness, at bay, and he fed it.

The lashing stopped. The stripes in his back burned like fire. The whip snapped again, suddenly, but not on his back. Turning his head as far as the iron frame that held him against the wall would allow, he saw the final survivor of his command. His eyes rolled around in his head and his bottom lip was bloody from his failed attempts to hold back his screams. They had him facing up, and the scourge was cutting bloody gashes into his face, chest and legs.

Tharune shook his head, disgusted at the minotaur despite his position. There was no honor in admitting to the pain. He was mewling like a woman. The humans, the elves who had forced them into servitude, they had forced him to scream.

The rusting chains that strapped his meaty arms to the iron frame were fragile to a minotaur. He could snap them at any time, and had done so once before. But the fortress was guarded heavily, and all his failed attempt had done was earn him two weeks without food.

Two of soldiers – no slaves now, he reminded himself bitterly – had killed themselves, throwing themselves upon the guards in a frenzy. Others had succumbed to the starvation, the torture and the bitterness of betrayal.

He was dimly aware of sounds in the background now. A voice shouted, his voice muffled through the thick oaken door. One of the guards in the room left, then another. The remaining guard looked nervously towards the door himself, as if entertaining the thought of leaving. Licking his lips, he drew his longsword and placed it firmly against the other minotaur’s chest.

He didn’t speak – from the way he nervously licked his lips constantly, Tharune doubted he could without trembling – but the gesture was enough. Move and he dies.

The now-deformed minotaur looked up, some semblance of his pride intact, and spat. He looked over at Tharune and nodded, almost imperceptibly. Then, his powerful arms shot up, snapping the chains like tin, and grabbed the guard. He was fast, but not fast enough. The guard placed his weight on the pommel, pressing the sharpened sword through the minotaur, through the open back of the holding frame. Just as the minotaur had planned, Tharune knew. The minotaur’s hands drew the now-struggling guard in, closer, pulling the sword farther in. When the guard was close enough, the minotaur reared his massive head back and slammed it once against the guards forehead. A loud crack, and the guard slumped to the floor, obviously dead.

The dying minotaur coughed once, then looked at Tharune through heavy-lidded eyes and nodded. Tharune nodded approvingly, then removed his own chains in a similar fashion to his dead companion. He kept a length of the rusted chain. It was a crude weapon, but a weapon nontheless.

Stopping before the corpse of the dead minotaur, he murmured a quick prayer, granting that the Destroyer grant this minotaur a place in the afterlife, then opened the oaken door cautiously.

The stone hallways were empty, the torches burning fitfully in their sconces. Dim noises echoed in the distance, far off. Choosing directions at random, he strode quickly. He chose corridors that looks as though they might lead to the battlements and was soon passing windows and arrow-slits.

A familiar noise poured in through the windows – the sound of battle. Rushing to the nearest opening, he peered through.

Alabaster-skinned giants dressed in furs dotted the courtyard. A large hole had been chopped or blasted through the stout gates, and the portcullis had been twisted nearly in two. What looked to be the entirety of the fortress guard was fighting for their lives in the small area between the wall and the keep proper, and losing. Although they outnumbered the giants three to one, the twelve-foot tall behemoths took blows that would down a normal man and continued swinging.

Tharune shook his head resolutely and ran down the stairs. Past the armored guards, past the frost-giants, past the destroyed gate lay his freedom. Past the courtyard lay vengeance.

Map of Northern Stronghold by Soloban 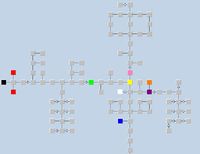 Map of Northern Stronghold by Cadee

Information from the Chosen of Fate subforum on the TFC Forums:
Map Notes by Cadee: This map was mostly made with an imp invis from a level 28 mage. Keep that in mind when I say something is aggressive; more mobs might be if you are not invis. Should you find yourself wondering this zone and decide to kill things (especially once you get past all locked doors) CONSIDER THEM before you attack. If you think getting the keys are hard...there was one very very nasty looking guy in the north most part.


Yellow room: The Hanging Tree. This is the safe room.


White room: The Barbarian's Cell. This has a pretty big agro mob (I think...really don't feel like making sure)


Blue room: A Farrier's Tent. This has the notable limiteds from the zone. The Farrier has a key to unlock the chest in the room. This is where ac 4-5 non metal shoes pop, they come in 3dex, 3str, and 3dmg. (Also notable limited...the weapons (slashers) can pop up to 8 *so I have been told*


Orange room: The Sergeant's Tent. This is where the Sergeant is, which is agro if you aren't invis and beat up Isolas pretty good :). He has the key to the green room.


Green room: Against the Cliff Wall. This room has a locked west exit, the key is on the Sergeant in the orange room.


Pink room: A Sandy Cave. This room has a locked north exit. The key is on the two minotaur eunuchs in the room. They are not agro, but may assist (see note) they are level 75ish mobmastery size. There are also two more of them once you get past the north door (in case you find yourself inside and feel like getting a key *shrug*).


Red rooms: The Council Chambers. This room has aggressive mobs (if not invis) they can get pretty nasty.


Black room: A Private Office. The mob in this room has the key to the purple room.