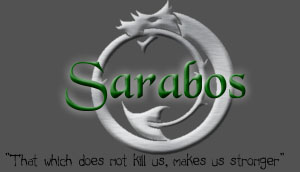 01/19/2001:
you stands a weathered and grizzly warrior with jet black hair, olive skin, and eyes of the glossiest Ebony. As the warrior removes his armor you notice three long, deep, and rather unpleasant looking scars running down the entire length of his gigantic back. Turning his head in your direction you notice a peculiar birthmark just below the right eye..... it looks like a serpent devouring it's own tail. The warrior seems startled by your presence only for a moment then quickly apologizes and s "Forgive me I was merely daydreaming of happier days, is their anything I can assist you with?"
Sarabos has a special twinkle in his eye.

My name is Sarabos. To begin with, my childhood wasn't the best it could be and definitely the not the worst. My Mother worked for Shril, collecting Rok eggs and my father was a guardsman. Both my parents were loving and kind. When I was thirteen years of age I entered in a youth fighting tournament in my hometown of Skor'lanis, where the first and second place competitors won entrance into the Adventurer's Guild. I was stronger and tougher than all the other kids in the town so wining the prize should've been no problem. I had qualified for the title fight and my opponent was Kilrogg from the distant Isle. Killrogg and myself beat each other bloody that day, but soon became the best of friends afterwards.

When we arrived at the newbie camp outside the Guild Kilrogg and I excelled in our training under Ankago, the warrior of the camp. We had many adventures on the river, in the stinky cave, and in the practicing arena. One day Kilrogg told me to meet him in a temple in the upper-courtyard. When I arrived i was shocked by whose temple it was. Thaygar, Master of the Ebon Hand greeted me upon my arrival and i fainted on the spot! After Him telling me about His return to the realm I immediately asked if he was accepting new followers. He said he was but the price was high to become a Servant of Death. After Thaygar told me of what I had to do, I sought out advice to se if the price justified the ends of worshiping Master Thaygar. It was this time Lady that we first met. You told me of that Master Thaygar wore Honor as some people were clothes and that he was a great leader. After hearing your words Lady I was convinced. The next day I was cleansed in Death by Master Thaygar.

Thaygar taught me that mortal possessions shouldn't be valued to where they hinder progress of one's self. Thaygar also told me that I should strive for maximum potential in everything I do. I also learned that what you said was true Lady. Then my Lord departed the Realm for good.

I spent weeks in sorrow my the loss of my Lord. My friend Kilrogg had also departed from the realm for good. In my depression I wandered, I somehow came to your temple Lady and you comforted my loss. Feeling abandoned, I asked if you would be willing to Accept me in your Chosen since you are the other person I respect most. If you allow me in your Chosen, I shall strive to be an outstanding member.

1. Will aid a minimum of three newbies (lvl 1-10) per session by providing arms, armor, food, and a container.
2. Will never retrieve his own corpse, and if it is retrieved by others he will take only the gold and three items.
3. Will not dual to shaman until he reaches level 30 warrior, at which point a new Geas will be taken.