Leading from Ofcol in the North to Seaside in the South, the Great Western Road is one of the main trade routes serving the continent. As with any trade route, bandits can be expected in the most unexpected places, and those seeking adventure may try one of the many turnoffs along the way.

The Great Western Road is, as it sounds, a long road running down the Western side of the Northern continent. Notable areas easily accessible from the Great Western Road (GWR) include: The Ruins of Ofcol, Midgaard, Haon'Dor, Lizard Swamp, Aarakocran City, The Bazaar, Dismali Lighthouse, and Seaside, though many others branch off the road as well. 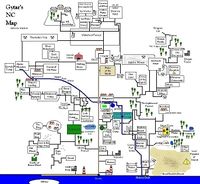