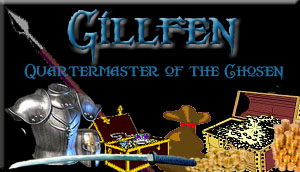 (Info by Cordir) Gillfen was originally created to take on a priestly role in the Chosen of Fate, and to have the specific goal of helping keep the equipment reserves of the following healthy (i.e., do lots of randoming for Cordir). However, people kept asking him to hold things for them while they were off doing CRs or other misadventures. He began to joke that he was the Quartermaster of Fate – and then took it as a formal Geas: To hold the following’s Simple Ring fund, and heavy, valuable pieces of metal equipment. He did get out of Guild now and then, with Cordir holding his items until he returned to Guild.