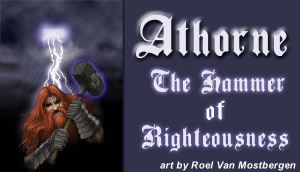 05/23/2002:
After your eyes finally focus through the pale blue smoke cloud, you
notice a short and rather plump little man, standing amidst the sweet
smell of his pipe. He takes a long pull on the stem of his ivory pipe,
exhales, and glances your direction, a warm smile crossing his lips.

The Dwarf standing here is a mish mash of pieced together armor.
The metal plates and links are strapped together with leather thongs,
cords and belts. The suit has been assembled for comfort, durabilty,
and purpose. Each dent, scratch, and etch mark holding a tale of its
own. The suit speaks of a lifetime of adventure.

Long auburn braids escape from the edges of his helmet, and hang
about his shoulders. The Dark red beard on his chin is streaked with
grey. His eyebrows are a bushy brown, and his cheeks a rosey shade of
red. His large green eyes hide years of wisdom. Hanging from his left
ear is a small silver figurine of a tiger, emitting sparks of light as
the firelight reflects off of it.


I, Athorne Battlehammer seek a position amongst the Immortals of this realm, initially as an Ambassador and eventually as a FLI if the powers so deem it.


I am a 40th level Warrior Cleric who has served his following and God faithfully and have completed, at least, 40 Mobmaster Quests as required by God Rules 10.


I have spent a great deal of time improving my skills and exploring this realm. I have been kind and generous to the Newbies of this realm to promote their success and that of TFC. I am a man of integrity and honor who abides by the spirit as well as the letter of the laws of this realm. I have never been the subject of God/Greater God/IMP discipline for any infraction of the rules or disrespect. (This is true for all of my TFC characters)


I have resided in this realm for over 558 years (1093 hours) as a servant of Tripper and, his Tigers. I have served in a position of leadership in the Tiger following, as Tripper's Ordained, and as Counselor.


I have not made this decision lightly or without great consideration of the duties and responsibilities that I shall take on if this petition is approved. I am prepared to dedicate myself to my following and TFC should I achieve the position of FLI. I have spent many hours in thought over this descision.


Am I ready?
Can I handle the weight of a following?
Will I make a good Immortal, and help the betterment of TFC?


I have decided that, I am ready and prepared to assume the responsibilities contingent on approval of this petition and that I believe I can do the job well.


Between my various characters I have spent over 3500 hours here on TFC. I began play in the Winter of 1998.


I have considered, at length, a theme for any following I might lead and have a couple reasonably well developed thoughts on the subject. I expect to flesh these out while serving as an Ambassador and under the tutelage of an FLI as an attendant.


I have read and fully understand the "God Rules" and fully support the aims and objectives posted there.