The following story was written for Tiax's Area Story Writing Contest:
Law of the Jungle - By: Dunstripe
There was no relief from the humid jungle, its encroaching heat setting his feathered body on fire. He had even removed his leather armor, so he wouldn't sweat so much. His bone-shattering mace had become a burden as he waded through the misty jungle waters, his feathers soaking wet and in no condition to take flight.

Finally getting to the other side, the sounds of life in the canopy surrounded him, the calls of countless jungle foul permeating in the distance. Ants the size of coins marched off with their plundered leaves, as swift simians sailed through the treetops to get a better look at their aarakocran visitor. His keen senses were overwhelmed by the abundant life force of this place, as he took a moment to rest underneath a massive tree.

Then he sensed something...something strange, perturbing, alarming. His senses detected with an aura of death and destruction, something lurking nearby. A sibilant hiss could be heard and he readied himself for battle. His keen eyes scanned the area, and closed in on something behind the jungle brush. Leaping upon it, he surprised the creature, and brandished his mace as if to strike a death blow on the creature. Looking down on his prey, he was surprised to see a beautiful green aaracokra, with a red plume, cawing in fear.

She unruffled her delicate, beautiful feathers. "My name is...Pentina."

He continued to look around, still sensing a strong aura of evil. "We should go somewhere safe, there is a vile creature nearby." So hand in hand they went deeper into the jungle, careful not to leave tracks that the creature might to follow them.

Night soon fell upon the forest, as Kemri and Pentina, exhausted, rested by the shade of a massive mangrove tree. Finally letting his guard down, there, he made a fire. A curious and enamored Kemri decided to find out more about his companion.

"So, where are you from, and why are you here?"

"I am from Aran, I am out here looking for the fountain of youth. It has been said that one who drinks of it cannot grow old."

Kemri chirped in delight. "I am searching for the same fountain! I have travelled all the way from the North to seek out its waters. My father is quite sick, and I want to bring him some of this life-giving water."

Pentina nodded in sympathy. "I hope for his sake we are able to find it."

Soon darkness fell, and the fire flickered and died in the humid jungle. In complete blackness Kemri was awakened by the sound of rustling in the bushes, and immediately his senses alerted him to the presence of that same evil he had encountered before. He heard what sounded like a snake coming towards him, and so he called out to Pentina.

"Let's go, something is here!" In the darkness he felt around frantically for his mace, and unable to find it, searched for Pentina.

"I'm here," she cawed, as she held his hand. The two ran through the jungle, and in desperation, did not bother to cover their tracks. The sounds of the creature followed still as Kemri and Pentina ran, Pentina holding on to his hand very tightly.

"I know somewhere we can hide," she whispered, "Follow me!" Without waiting for his approval, she dragged Kemri through the rough terrain, moving almost like she could see in the utter darkness. Her already firm grip on his hand tightened even more.

Suddenly, she stopped, and the sound of moving rocks could be heard. Her grip on Kemri's hand tightened even more. Kemri tried to free himself from her grip, but could not. "Where are we?" he whispered.

Suddenly, a pair of red eyes appeared in front of them. Then, another pair, and another, until he realized they were surrounded by glowing, red eyes. Sibilant noises of hissing and slithering became nearly deafening as Kemri looked for a way out in the darkness.

With a hiss light illuminated the room. Kemri closed his eyes in the glare, and upon opening them he found himself surrounded by serpent-like creatures, their double-tongues sensing the air, sensing his fear, and desperation. He looked over to Pentina, who had still not let go of his hand.

"This is my home," she said, as her feathers seemed to molt off of her body. Shedding her veneer as Kemri struggled to get free, her emerald body clamped around Kemri as he realized that she was none other than the Serpent Queen. Two fangs sank into his neck as he yelled in pain, the poison slowly decapacitating him, running through his veins as his struggling became ever-weaker. The serpent-creatures came closer and closer, as the poison and constriction slowly drained the life out of him... 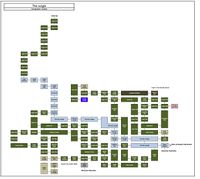 Map of The Jungle by Soloban
Retrieved from "http://www.tfcmud.com/wiki/index.php?title=The_Jungle&oldid=8420"
Categories: