The Blue Savannah is a secluded grassland on the banks of the Masarra River, located near Lineaoth Valley. Due to the positioning of the Masarra River over an ancient locus of primal mana, the flora and some of the fauna of the Blue Savannah bear a slightly blue tint. Cut off from the world around it by high mountains, it is home to many species of own indigenous wildlife, trolls, and a human civilization, the Palu. Having developed on their own for centuries, the Palu people speak Thoras rather than Common, and practice their own shamanistic religion.

Life was to change forever for the denizens of these quiet blue-tinted plains when a Dwarven fortune-seeker named Anakor stole the fabled Fist of the Mountain, using this forbidden weapon to bore a path through solid rock, eager to claim rumored treasures beyond the Masarra River. Blasting the mountain again upon his emergence, Anakor intended to keep his sojourn a secret, but has attracted the attention of a mercenary squad, led by Vertecca, who have their eyes on a hefty reward should they retrieve him, dead or alive. However, this has proven a challenging endeavor, as Anakor has covered his tracks, causing a massive rock slide upon his emergence from the mountain. To this day, the mercenaries work diligently to get through the depths.

The following is a selection written by Kaleyah detailing the events that occurred shortly before the expedition to hunt down Anakor:

Vertecca let out a sigh, shaking her head solemnly. Before her, tethered to a chair with magical bindings, sat a dwarf, the fire of defiance nearly gone from his eyes. Waiting in a shadowy corner of the dark room was an elven spellcaster, who dipped her hands into a vat of soothing potion, the pot sizzling and smoking as it restored her hands. Vertecca took no joy in inflicting pain on others, but she was doing what she needed to do.

She knelt down to eye level, and sighed as she examined the dwarf's wounds. He would not be able to take much more pain. Most of his skin had already been seared from his body, with his cheekbones jutting out ominously, and his beard almost completely scalded away. She girded her heart against feeling pity for this loyal, but foolish, captive.

"Just tell me what I need to know, and I will end your suffering. Where is Anakor?"

The dwarf, tightly bound to the chair and in excruciating pain, didn't answer, letting out only a whine of agony as he spat out chunks of tar-black blood.

Vertecca nodded to her companion, a raven-haired elf with a sadistic glow in her eyes. Stepping forth from the shadows, her smile was far too gleeful to be appropriate for the grim task at hand. She uttered two magical words, and from nowhere, an globule of green liquid faded into existence, floating in the air and glowing briefly, before crashing against the skin of the dwarf, hissing vehemently as he screamed in agony. Vertecca sighed, trying to fan away the acrid odor with her steel fan. Her companion dipped her hands into the soothing vat oncemore, trying to wash away the stench and the irritation caused by her acid blast.

"Don't make this harder than it needs to be, I beg of you."

The dwarf's face now appeared to smile, but it was only because most of his jaw was exposed. He could no longer close his eyes, since his eyelids had been scalded off. Coughing and wretching, the miserable dwarf finally caved in to his interrogators, a stream of words issuing forth from his mouth, along with blackened chunks of blood.

The pitiful dwarf could say no more. Vertecca nodded, relieved, reaching for her falchion. With a single deft strike, she brought the heavy blade down on the back of the dwarf's neck, ending his misery, as his head dropped to the ground with a thud. Without relish, she cleaned off the blade and opened the door, not looking back as she made her way up the stairs.

She knew now that the threat was much more serious than she had anticipated. Not only did Anakor steal the artifact, but he knew how to use it. He would have to be apprehended before he could do more damage. Vertecca knew what she had to do.

Somewhere, amid an endless sprawl of blue-tinted grass, a troll stood up, sniffing the air. Something was different today...he sensed an odor he had never sensed before. Squinting his eyes in an attempt to get a look of the approaching figure, his heart was filled with an inexplicable rage. Tucking his spear underneath his arm, the lanky blue-skinned troll crept towards the strange, dark-clad figure, who was sweating heavily in the heat of the sun. Sneaking closer and closer, the troll's heart beat with excitement, with a flock of birds flying overhead the only witnesses to his advance. All of a sudden, the dark figure stopped in his tracks, aiming his fist into the sky, his gauntlet glowing green. A blast of energy shot out from the gauntlet, and with a thunderous explosion, several birds fell to the ground. Stunned, the troll ran for cover. Who was this shadowy figure? What was this mysterious power which he wielded? Fleeing, the troll knew that the balance of power in the Blue Savannah would now be forever changed.

The Blue Savannah was named after the eponymous song by Erasure. It was initially conceived on 9/24/03, and after numerous rewrites and a long hiatus by the author, it was installed on TFC 4/26/06. Arella was the first mortal to discover the area.

"This area was intended as a Southern Continent alternative for Wintermeet Valley. At the time, Wintermeet was a crowded leveling zone, and I wanted to provide a way for smaller characters to get geared up after deaths, as well as to improve their existing equipment. The Fist of the Mountain was supposed to be a one-handed blunt weapon with a unique damage range, but limits on that version of the Muditor creation tool meant it was not able to be made that way.

I decided to give it a African-inspired theme because there wasn't anywhere like the Serengeti on TFC. Over the three years I worked on this zone, I built around this idea, putting in a central villain, as well as indigenous peoples, hints of their religion, and finally the mercenary company, who use spells accessible to players in ways that normal player characters cannot." 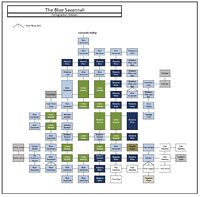 Map of The Blue Savannah by Soloban
Retrieved from "http://www.tfcmud.com/wiki/index.php?title=The_Blue_Savannah&oldid=9179"
Categories: