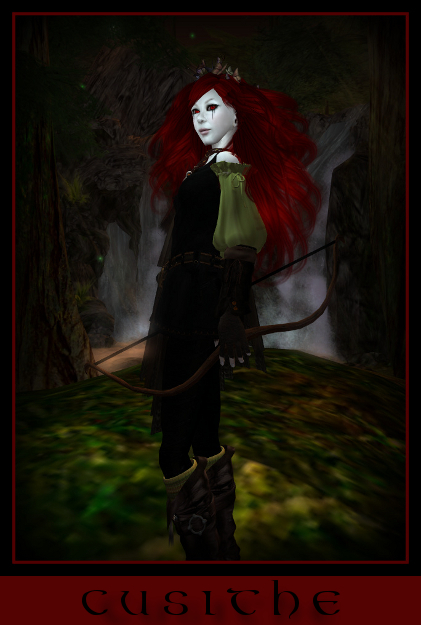 Her hunting horns urged us on, on, on. We ran through the forest, suffused with the joy of the chase. My leg caught in a fallen log and I fell behind. Still, I heard the thunder and the storm as She ascended, my heart pounding and surging in my chest. I was alone in the woods, for a time. A long time. My leg healed, but the yearning to return to the pack never faded. Then, one day, a whisper. A thought. A sorrow. In response to it, a fiery moonlight burned through me and my shape changed. Pale like that moon above, bloody as Her thorns, I sought Her out. Now I am pack once more. Soon, the horn will sound...

Within a Grand Hunting Lodge
[Exits: west]
Massive beams of dark, ancient pine form the walls and ceiling of this enormous
hunting lodge. Trophies hang upon the wall, ranging from a simple twelve point
buck to the scaled head of an ancient red dragon. The chamber is laid out
symmetrically with rows of tressle tables and wide, stone fireplaces to either
side of the main corridor. To either side of the main door, twin staircases
spiral upwards towards the lofts where the hunters who live here take their
rest. The floor is strewn with sweet smelling rushes and fur hide rugs. In the
north-west corner, a small door leads out to the pens and stables. At the far
end of the lodge, a semi-circular raised platform holds the throne of the Lady
Huntress. The scent of a fresh kill and roasting meat fills the air, and the
sound of the hunting-hounds baying causes your blood to rise in your veins,
suffused with an intense joy you cannot explain.
An enormous, empty black iron cauldron hangs above an unlit firepit.

A white blur moves just out of your range of sight.

Someone whispers, 'You think she heard the call Mana?'

Katrana has granted you the ability to see her when she is invis.

Cusithe leans back her head and scents the air.

A white hound appears beside the Huntress eyeing you suspiciously.

Katrana sits down and thinks deeply.

Cusithe sidles slightly to the side, a soft growl low in her throat.

Katrana says, 'How do you know this little one?'.

Cusithe tucks a shockingly scarlet lock of hair behind one pale, pointed ear.
Cusithe says (in common), 'How does the fish know that the sea is its home?'.

Katrana grins Wyldly.
Katrana says, 'Unless it's a Swish...'.
Katrana giggles at her own joke.

Cusithe throws back her head and laughs.

Katrana says, 'That is the case for most fish. You do carry yourself like one of Mine.'.

Katrana giggles.
Katrana says, 'And Manatheren has not growled at you...'.

Katrana sits down and thinks deeply.

Katrana glances at the hound beside her.
Katrana says, 'Which is odd for him.'.

Katrana says, 'He only prefers my cuddlies.'.
Katrana sits down and thinks deeply.

Cusithe tilts her head, regarding the Hound, the gesture not one of submission, but of acknowledgement.

The hound returns the gesture.

Cusithe sits crosslegged on the floor, her palms flat against the stones.

Katrana tilts her head to the side in thought.
Katrana says, 'How long have you known little one?'.

Cusithe scratches absentmindedly at her wild, unruly mane of hair.
Cusithe says (in common), 'I have always known.'.

Katrana grins Wyldly.
Katrana says, 'Few know they are destined to walk within the ranks of the Wyld Hunt.'.
Katrana says, 'Those that do know...can be, well, unpredictable.'.

Cusithe twitches her nose a moment as she considers.

Katrana says, 'Almost as much as your hair.'.
Katrana giggles Wyldly.

Cusithe tosses back her head and laughs aloud.
Cusithe bows her head in acknowledgement, her locks brushing the floor.

Katrana says, 'A hint little one. When you Hunt, you should tie it back. '.
Katrana winks suggestively.
Katrana says, 'Took me years to learn that!'.

Cusithe nods.
Cusithe says (in common), 'it catches in the branches.'.

Cusithe idly draws a leaf from the tangled mass.

Katrana gestures to the lodge.
Katrana says, 'To be one of my Hunt.'.

Katrana says, 'Worship when you are ready.'.

Cusithe worships Katrana!
Katrana has accepted Cusithe into the following!

Cusithe says (in common), 'I shall, Mistress Wyld'.