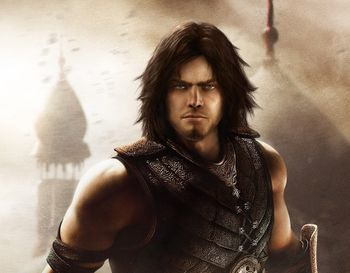 Your gaze is drawn to this man of average height and build. Something
about him seems...off. He shifts his stance slightly, shoulder-length
hair the rich color of chestnut brushing across his shoulder plates and
falling over one of his eyes. Eyes the color of a glacier reflecting the
blue of the sky above. The heavy mace at his side brushes against his
leg plates, tearing your eyes downward to catch the movement of his hand
as his fingers wrap around the grip. His lips curve into something akin
to a smile and you glance up again, only to realize it is nothing more than
a sneer of contempt. Your feet instinctively draw you backwards as you feel
a sense of dread, knowing your own DEMISE is soon in coming.