The Mountain of Knowledge also contains the Adventurer's Inn, about which, this story was written:
"In the Cards" - By Kaleyah
He left Adventurers' Inn contemplating what Bethany had said to him. "You will die by your own hand," she had told him. He didn't understand. He was not the kind of man who would ever commit suicide, but he also realized something: if he was to die by his own hand, then he could not be killed by anyone else.

"I am invincible," he thought to himself as he made his way to the Magistrate, "I can earn money as a Bounty Hunter, only I will never be killed! No one can kill me but myself."

He was an accomplished fighter, but he had never thought he would be invulnerable in combat. Brimming with confidence, he asked the Magistrate to employ him. As a rite of passage, he was to fight one of the Bounty Hunters, and he soundly defeated the Hunter. Impressed, the Magistrate hired him as one of his killers for hire.

Years passed, and the grim business of contract killing became commonplace. Sometimes he would go back to the Adventurer's Inn, and he would spar with Pertex, and Ancalagon, and he would defeat them every time. His payroll grew steadily, as did his pride and his arrogance. But in the corner of the room sat Bethany, shuffling her deck of tarot cards, sighing as she laid eyes on him.

"Your pride will be your downfall," she said to him. He scoffed at her warnings. "I will never kill myself," he laughed, gesturing dangerously with a dagger, laughing as he went upstairs with Branda the Serving Wench.

Bethany shaked her head. "It is in the cards," she mumbled.

The Magistrate was particularly tense one day. "Hunters, you are to kill this man." He unrolled a parchment scroll containing the picture of a notorious criminal. The Bounty Hunters cowered, but the man laughed. "I cannot be beaten. I bring take him in."

The Magistrate nodded. "Go, and may fortune be with you. Great fortunes will be with you as well, should you bring him in, dead if necessary."

Ready to descend the Mountain of Knowledge, the hunters were surprised to see the infamous vagabond right outside the Trading Post, waiting for the door to open. All at once, the four Hunters lept at him, but one by one they were killed with a few swift strokes of the criminal's blade. The one Hunter remained, wounded, but still alive.

"Surrender or be subjected to the hand of justice!"

The criminal smirked. With one mighty slash of his blade the Bounty Hunter fell to the ground, bleeding profusely. He could feel his life slip away as the criminal entered the Trading Post nonchalantly.

"How can this be possible?" he thought, as a ghostly figure approached from the north. In a puddle of his own blood, he looked up to see none other than Bethany, shaking her head as she turned, about to leave.

"Curse you witch, and your lies! You said I would die by my own hand, not by the blade of another!" Even as he spoke blood poured out from his gaping wounds, clearly beyond recovery.

"I did not lie to you." She turned to go, and the Hunter fell to the ground, the last of his strength now gone. He tried one last time to get to his feet, but a sharp pain shot up his arm as he tried to prop himself up upon it. There, in the pool of blood, lay his severed hand. He collapsed in disbelief, never to rise again. 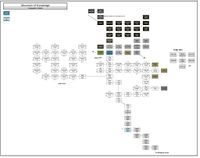 The Mountain of Knowledge: Map by Soloban 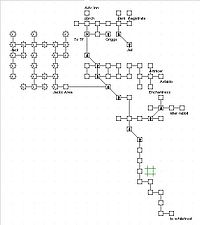 The Mountain of Knowledge: Map by Tranquility & Ptarchyzk