The Abridged History of Dhuvrad.

On a cold winter evening a group of dwarves sat beside a fire conversing over several pints of ale. Bellagg, the leader of the crew regaled them all on his meeting of a stranger whom had offered him these four bottles of what appeared to be a very unique ale. He passed a bottle to his comrades and when they all had one, Bellagg grinned for a moment and raised his bottle as a toast. "To our health and wealth!" and they all took a drink. Instantly, they knew it tasted a bit odd and loud grumbles began to sound like a landslide of rocks down the side of a mountain! "Something is off, this is no ale!" sounded off Bellagg! "Indeed it is not" said another friend as he slowly began to fade in and out of view!!

With a crack and a boom the four of them were gone! Or were they? Though their small camp was indeed barren they had not died! Somewhere, far away they found themselves standing outside the mouth of a cave! They checked themselves out, all was in order. "What was that?!" demanded a friend. Bellagg calmly responded, "We've been tricked." The four of them then looked at the cave and since there was nothing else to do now proceeded to enter, one by one. The light came into the cave behind them and lit up the walls, oh what a sight! Gold, silver, copper and more this was everything they could ever dream of!

They set out to explore and found a body of water. Though they were scared, they knew that a fortune was waiting for them in that cave but they would need help. So they set sail to their home in Lineaoth Valley and told them all their tale. Some went on and said they were mad, and some asked them where to sign up? All in all, some forty and seven dwarves set off to explore and when they arrived it was as Bellagg said!

They began mining immediately and became very wealthy. Bellagg was named king, though he had protested - accepted the offer and so it goes."

The dwarf city of Dhuvrad is nestled underneath the Outland Frontier. Dhuvrad was once a very lucrative mining operation. It eventually became a popular settlement and grew from that, to the city it is today.

Dhuvrad is typically called home by the most intrepid dwarves of the Realm. Situated along the Southern Sava River of the Outland Frontier, it can be very harsh living conditions as well as difficult to travel to and from the grand city. Bellagg has been the crowned king of the Dwarf city for decades now, and shows no sign of slowing down. 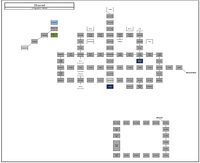