In November 2013, I traveled to the Black Shrine with Cresom and Korran. This was probably a bigger group than was entirely necessary. My task was to map and document the zone as clearly as possible. This is the results of that mission. Samiyah (talk) 08:19, 19 February 2014 (MST)

Directions: Go to Midgaard and obtain the key from the Sextant in the Park Cafe. Go to Midgaard Graveyard; you will need the key for the second door. From the second gate in the graveyard (the one that is locked and requires a key and cannot be picked), go SESS / ope E / E S S / Open S / S to the Chapel. The Evil Shrine is to the east. Neutral is to the South. Good is to the West.

Aggressive Mobs? : All mobs in the zone are Evil and Aggressive

Arch Mobs?: There are no Arch Mobs

Shoppies: There are no shopkeepers

Lockable Rooms?: There are no lockable rooms that have no other exit.

Locked Doors?: The door to the second level is locked.

Keys to Doors?: The key is to the second floor is found on the Shadow Giant: "A skull topped key"

Safe Rooms: There are no safe rooms. 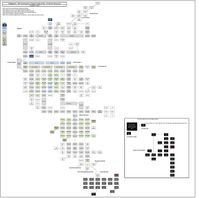 The Black Shrine is accessible from the Midgaard Graveyard chapel.