Barbegazi is where a few hardy gnomes have settled, hidden away in plain sight in a populated area of the Outland Frontier. These crafty gnomes enjoy deceiving their above-ground neighbors.

"A spectre is haunting the land - the spectre of the Barbegazi. All the powers of the land - the elves in their forest homes, the dwarves in their sunken mines, and even the stupid humans in their cities of wood and steel, are in a holy alliance to exorcise this spectre. I, Rubezahl of Barbegazi, along with the ideas of liberation for all gnomes, am that spectre. These adversaries, who are champions of oppression, death, war, and ignorance, oppose me with a vehemence once reserved for the darkest of dragons. They decry the freedom the Barbegazi would bring to the gnomes of the world, for it would mean their very destruction. And a just destruction it would surely be. This then, is our Manifesto. It is an open declaration of our ends and, as importantly, our means. Let the oppressive races of the would tremble at this call to arms. We, the Barbegazi gnomes, have nothing to lose but our chains. They have a world to lose."

"The Barbegazi gnomes lived as if in a Dream - a dream outside our conscious control, twisted and dark. We thought we were satisfied with our lives, tinkering with our mechanical devices, and working our ever more deep and depleted mines. In truth, while we slept, the other races of the world had long ago seized control of our lives, keeping us complacent with empty words and dirty gold. They made us believe that we needed them more than they needed us. For hundreds, or perhaps even thousands, of years the Barbegazi gnomes served the whims of the other races, always living with the unmentionable fear that without the elves, dwarves, and humans, our world would dissolve into chaos. Our society was built on a foundation of greed which filtered down from our interactions with those less noble races. Gnome was set upon gnome for even the smallest chance of gain or profit. Families and friends were torn apart by petty feuds over gold, ore, or even simple farming rights. The wealth of our ruling class was juxtaposed with a deep moral poverty that only served to oppress and misuse the working class, who represent the true heart of the Barbegazi gnomes.

It was within this context that I, Rubezahl of the Barbegazi, one day awoke from this dream. With the force of the mighty In'zerre, I was hit with a revelation. The gnomes of the world must be free. Free from the influence of the lesser races. Free from their oppression and immoral conduct. And it shall be the Barbegazi who lead them out of darkness.

"I began to form a following of Barbegazi gnomes. At first we were but a small group of like minded gnomes, meeting regularly to vent our frustrations and speak our minds. It was our goal to sweep away the old political powers by means of a revolution from within Barbegazi society. Quickly, through the force of our message, our power grew and became noticed by the corrupt gnomes who collaborated with our enemies to keep us under chains. They conspired to destroy our budding organization through deceit and treachery. Many of our members were found murdered or simply vanished. These events only served to strengthen our resolve and it soon became clear that no peaceful means would bring us our salvation. Only through violent revolt would our aims be achieved. This then, has become our rallying cry: only violence can bring birth to freedom."

"Long did we struggle with the forces of evil. However, the strength of our ideas were too powerful to be held down by those of corrupt heart and mind. The growth of my following was unstoppable, and within a decade of its founding, we were on the verge of bringing all of the gnomes in the world under the rule of the workers. The Barbegazi homeland had long since fallen under the sway of our policies and we had extended our reach into the other gnome settlements of the northern and southern continents. It was then that we met our strongest resistance. The other races of the world were content to let us struggle amongst ourselves, as long as the precious metals which we had helped them collect continued to flow into their overflowing coffers. Once they realized that our message would not be contained simply amongst the Barbegazi gnomes, but instead was meant to liberate and organize all gnomes across the land, they redoubled their efforts to destroy us. The Barbegazi homeland was besieged by a conglomerate of elven, dwarven, and human forces. Even the normally peaceful giants of the north land joined this evil cabal in the effort to destroy us. The Barbegazi homeland, ruled now by the glorious workers and priests of my following, was attacked without warning and without mercy. It was only through the force of my leadership that we were able to repel the attackers. We were able to gain only a brief respite, however, as the attackers remained outside the entrance to our homeland, besieging us for many months. We could not hold out for very long, and the power of our rule had been but a mirage."

"Within a matter of months from the beginning of the siege, the gnomes of the Barbegazi homeland were near starvation. We realized that if we did not escape, the caverns which had been our home for thousands of generations would become our grave. In council with my cadre of priests, it was decided that we would leave our homeland and seek out a new land, a new life. We had remained sentimentally attached to our homeland for far too long, and it was time to use our innate abilities to forge the underworld to aid in our escape. A group of elite priests were sent out to scout safe passage from the land and beyond the reach of the forces of destruction. They soon learned that an enterprising, yet foolish group of humans had formed an armada of vessels to explore the unknown oceans and perhaps find a new world beyond the known lands. Despite our races inborn fear of the open water, it was decided that our only escape would be to stowaway on these ships and build a new life, and a new homeland. We would carry our message and there forge a society of true gnomes, with the ideals of the Barbegazi firmly planted in the hearts and minds of all. The humans never knew of our presence on their ships. Countless times did their ships founder, and yet each time through our hidden devices were they rescued. They believed these to be "miracles". Hardy though the humans may be, stupidity is their hallmark. For months did the ships travel, until finally this new land was reached. We, the Barbegazi gnomes, have found our new homeland. A new dawn has come. And I, Rubezahl of the Barbegazi, shall carry the light of our message for eternity."

The Barbegazi Gnomes worship Rubezahl like a God. Secretly, Rubezahl must have died many years ago. In order to keep up the charade and maintain his power, Kimden, the head of the Barbegazi Secret Priests has charmed the King's corpse. It now sits on a throne encrusted with fake jewels. The kings lifeless body is now controlled by Kimden's Secret Priests like some sort of sick marionette. 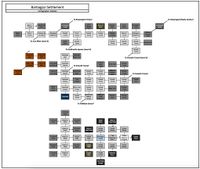 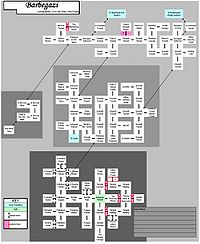